Thanksgiving isn’t an Italian holiday but Italians really romanticize it.  It fits perfectly with their love of family, food and tradition.  Our friend and practically adopted son, Chef Simone Proietti-Pesci from Umbria makes an annual pilgrimage (no pun intended) to Washington to celebrate Thanksgiving with the Menard family and to do some special guest chef appearances at Via Umbria and as a private chef in customers’ homes.
This is Simone’s delicious take on turkey that uses a few fresh ingredients to bring out the flavors in a turkey.  And this recipe is best enjoyed with a special bird.  Try it with one of our local, cage-free Fields of Athenry Farms turkeys.  You can order yours online and pick it up on the Tuesday or Wednesday before Thanksgiving!
SIMONE’S TURKEY RECIPE

Thanksgiving isn't an Italian holiday but Italians really romanticize it.  It fits perfectly with their love of family, food and tradition.  Our ...

The turkey is a noble bird, or so thought Benjamin Franklin when he argued that it, not the warlike, predatory eagle, should be America’s national bird. He had a strong case, the turkey being a species native to North America, ranging in the wild from Mexico through the eastern United States and into Canada. And although Franklin didn’t succeed in putting the nearly flightless gobbler on the Great Seal, the turkey has become essential to American culture and cuisine–arguably the only required part of our annual Thanksgiving Day feasts.

Turkey is, however, one of the most misunderstood meats in our diet. During the rest of the year, we eat almost exclusively the white meat in deli sandwiches. The rest is discarded or ground for burgers and the like–pretending to be the cheap, lean option. But then, once a year in November, there is a massive demand for the birds whole. The sheer quantity of turkeys in demand means that most of them come from “farms” that resemble factories more than a traditional farm. And the birds themselves are a breed more or less developed in a lab so that the breast meat is larger than natural. When cooked, these turkeys are bland and tend to dry out easily.

This is what I had to take into consideration when I decided to sell turkeys this year. With our commitment to tradition, quality, and locality, I wanted to make sure that our turkeys were something to be proud of. So I drove an hour away from the District into beautiful upper Loudoun County, Virginia where the rolling hills start to reach towards the sky in the Appalachian Mountains and breweries and wineries hide around every corner. I met with a local family farmer, whose farm, Fields of Athenry, began to raise wholesome animals to ensure that their children ate well. Heading up the driveway, I was almost immediately greeted by a loud chorus of gobbles from a pen near the entrance. There they were, in the daylight, turkeys running around in the grass with no cage in sight. As the farmer, Elaine, showed me around, she pointed at specific birds and mentioned what breeds they were. A Narragansett here, a Blue there. It was impressive watching this flock wander around the field together, with the occasional few flying over the fence and then, birds that they are, unable to figure out how to get back in and rejoin their friends. 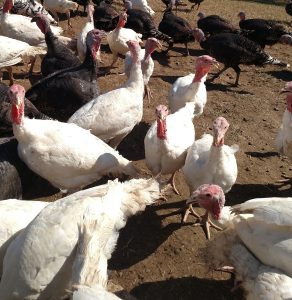 I learned that the farm actually operates across three properties in Loudoun County and just over the river in Maryland. In addition to the turkeys, the family raises cows, pigs, chickens, geese, ducks, and make their own deli meats and bacon–all with the same standards of care they show for the turkeys. I’m really excited to work with these guys. But for now, for Thanksgiving, we’re going to have some of the best turkeys available. We have pre-ordering available now through November 16 online or in the store, and can get you a bird as close to the size you want it. I can spatchcock them for you, if you’re feeling adventurous and ready to grill, and Chef Johanna is preparing an awesome cider brine, if you so desire. Plus, we’re cooking up some awesome sides and appetizers to pair with them. Long story short: order a turkey! I promise it’ll be one more thing you’ll be giving thanks for this year.

The turkey is a noble bird, or so thought Benjamin Franklin when he argued that it, not the warlike, predatory eagle, should ...