There isn’t a single event at Via Umbria that I don’t look forward to but the Ivy City Smoked Salmon tasting particularly piqued my interest. I know I’m not alone that for me and my family, smoked salmon is a kind of simple luxury. We enjoy smoked salmon by itself as a snack or for breakfast in our bagels or for dinner in a salad or a pasta. Our affinity for smoked salmon can let us tell you that not all brands are created equal which made Ivy City’s appearance much more intriguing.

It was an intimate event which fostered intimate connections. I was seated next to some Via Umbria regulars, and by regulars I mean almost daily customers, whom I had been acquainted with before. As always, conversation flowed freely while we noshed samples of five of Ivy City’s smoked fish paired with a variety of spreads, my favorite of which was a creamy goat’s milk butter. An Ivy City rep explained to us the kinds of salmon we would be tasting which was an educational experience in and of itself. I did not even know there was such a thing as hot and cold smoking!

The salmon itself was divine which makes it no surprise that Via Umbria has started carrying it. 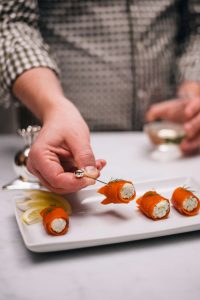 Three in particular stood out to me; the traditional smoked salmon was superb and as someone who appreciates the classics, I wondered as soon as it hit my lips if there was any way I could send this to my mother who lives 2,000 miles away. This is the kind of salmon that you want on a Sunday morning when you want to feel decadent without leaving the comfort of your home. The other two surprised me, one that had hints of dill and the Ivy City signature “Salmon Candy” which carried notes of honey without being overly sweet. The savoriness of the salmon and the honey played so well together that I only wish I could have more.

If you missed the tasting and are in the neighborhood please stop by to take a look at the Ivy City products Via Umbria has started carrying. You will never regret an opportunity to let what Via Umbria has to offer meet your taste buds.

There isn’t a single event at Via Umbria that I don’t look forward to but the Ivy City Smoked Salmon tasting particularly piqued ...