As February gives way to March (and aren’t we all looking forward to the prospect of non-Arctic March temperatures?) I can’t help but reflect that this young new year has for me featured a heavy dose of wine.  January was spent with Chef Simone crisscrossing the continent doing a series of promotional dinners that featured food/wine pairing nearly as much as the food itself.  February saw a return visit of our friend Daniele Sassi from the Tabarrini winery for a special winemaker’s dinner at DC hotspot Casa Luca.  And just a week ago we said our goodbyes to our friend Roberto DiFilippo, owner of DiFilippo and Plani Arche wineries who spent five days hosting winemaker dinners at Via Umbria and tasting events at the store.  Playing apprentice to and spending time around the table (always with glass in hand) with these professionals surely upped my wine game.  It was pretty darn enjoyable, too. 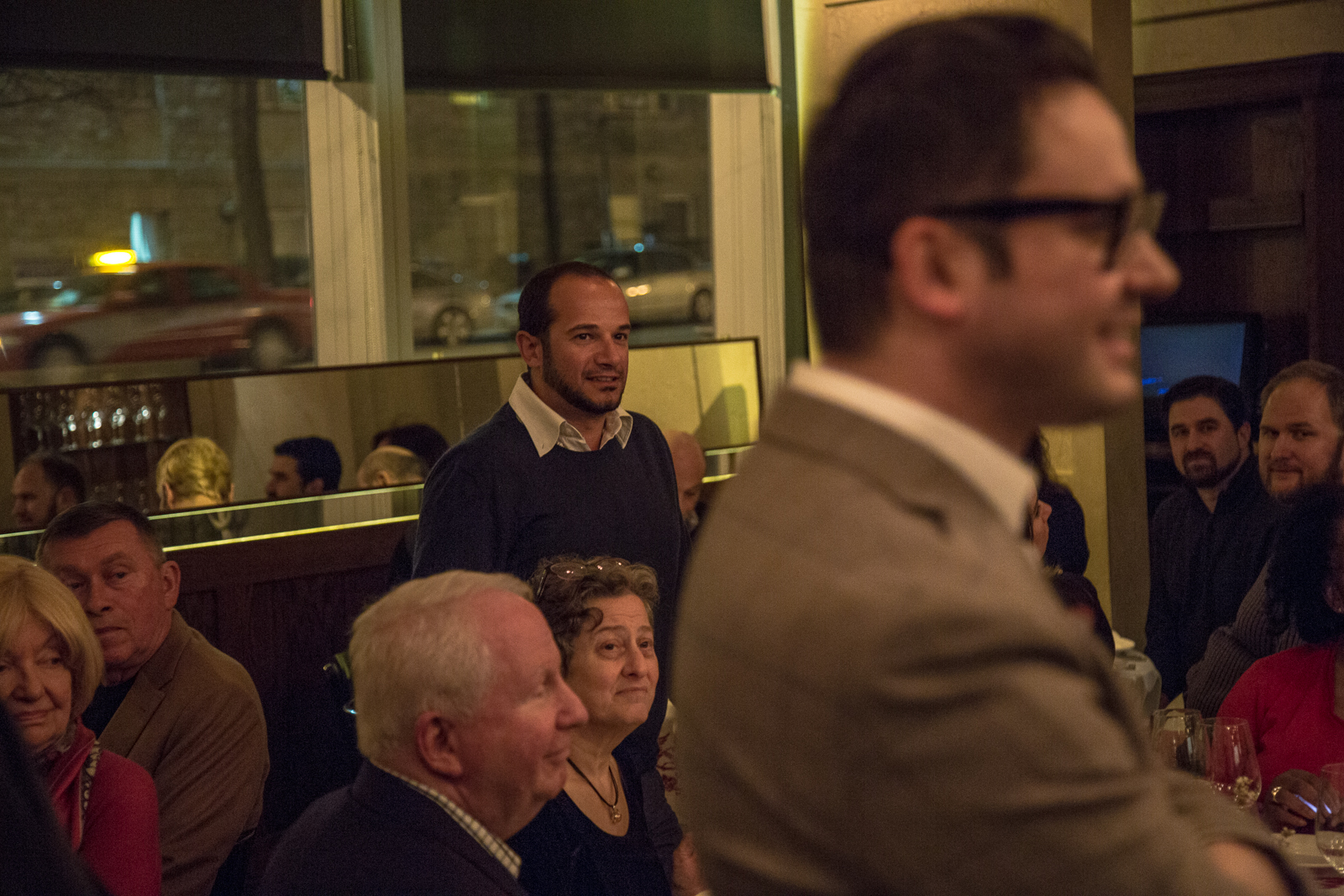 Chef Simone listens in at the Tabbarini Dinner at Casa Luca. 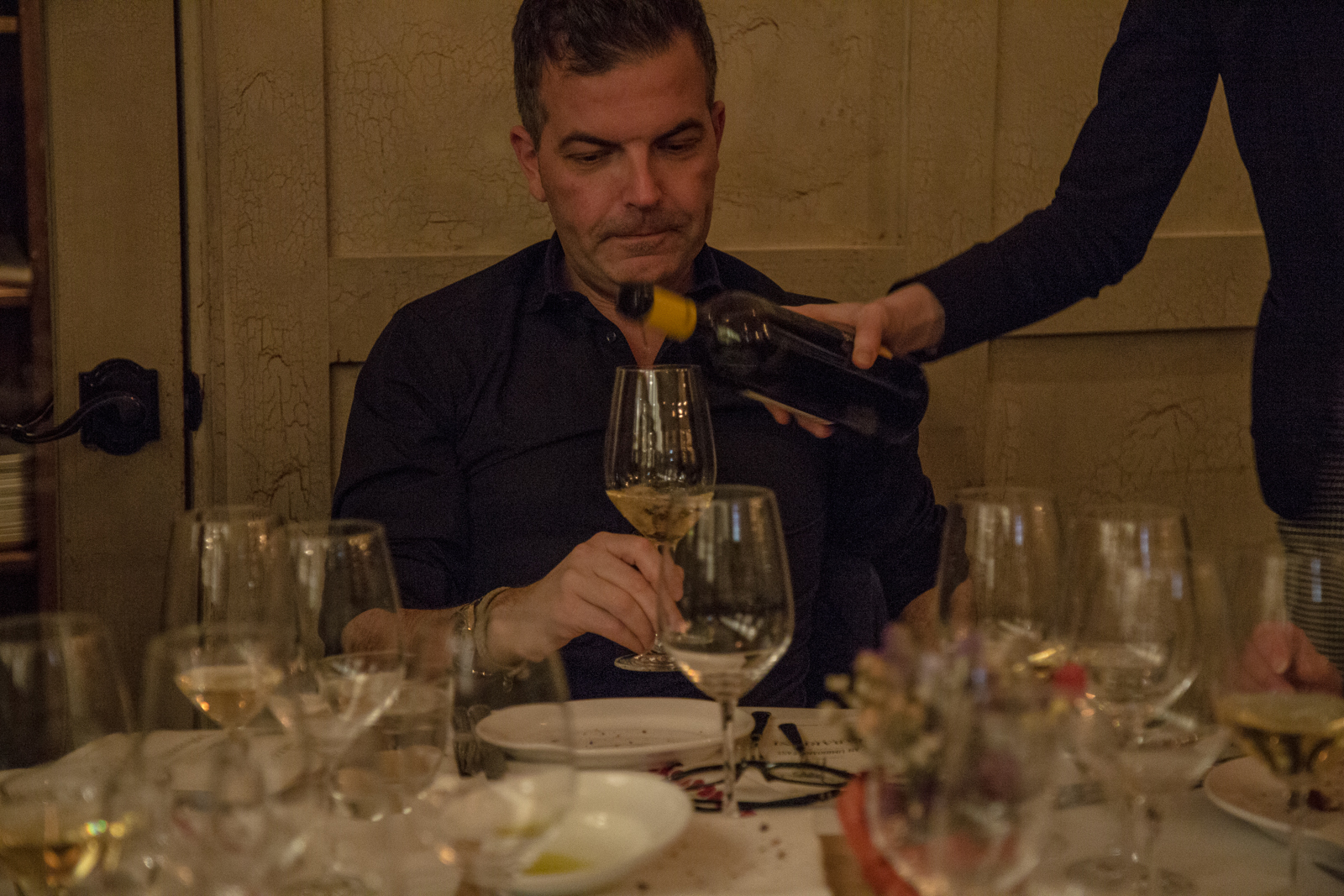 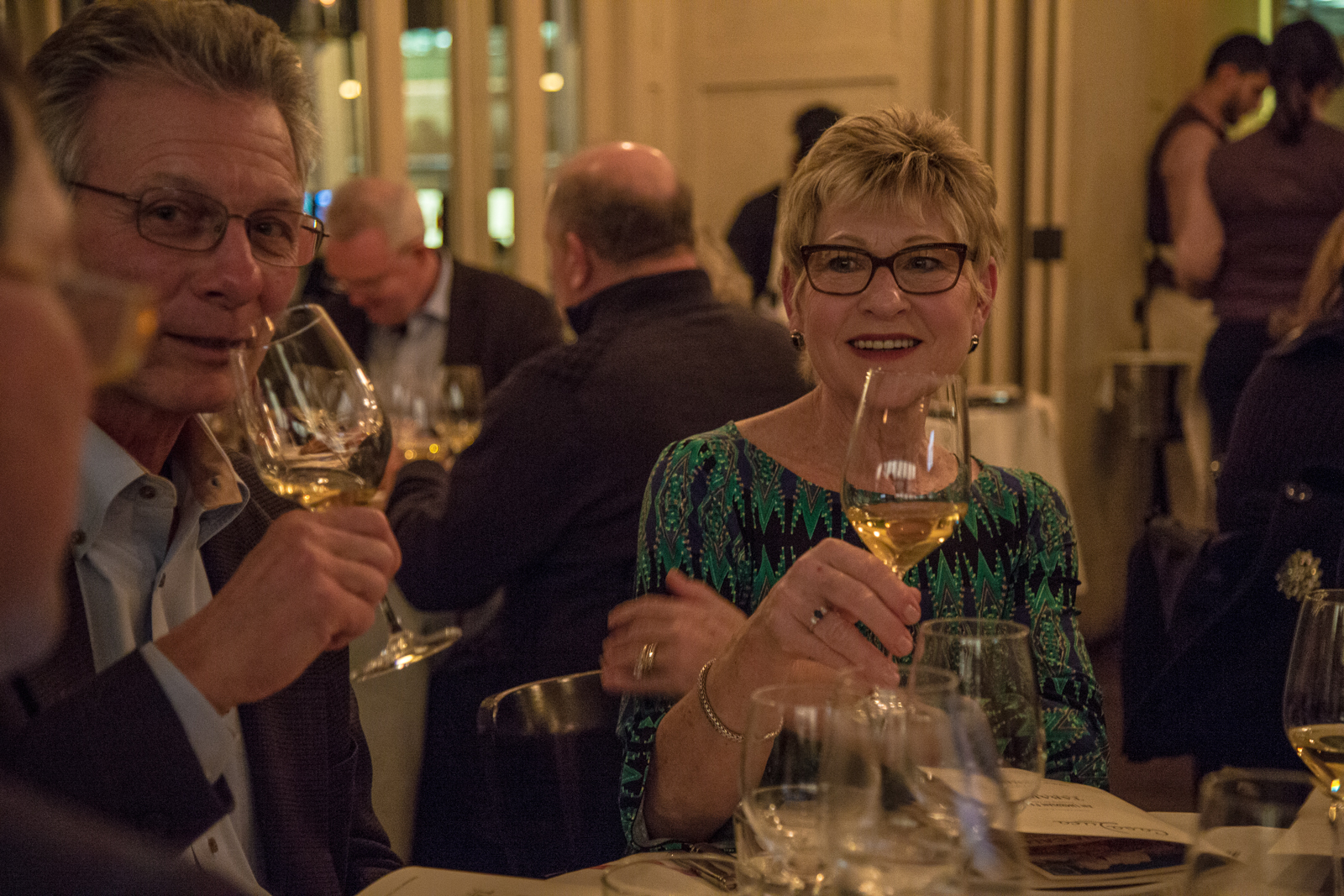 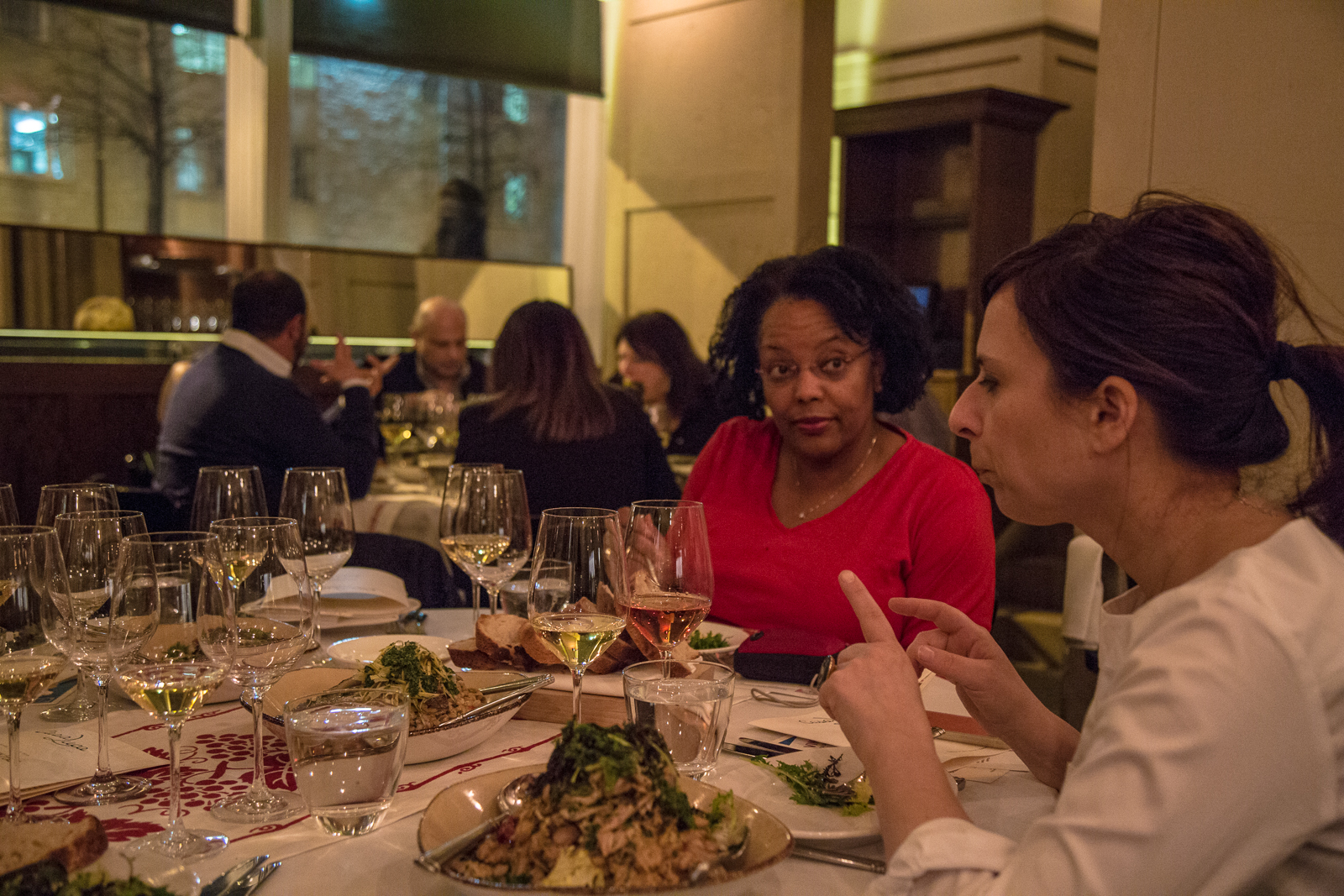 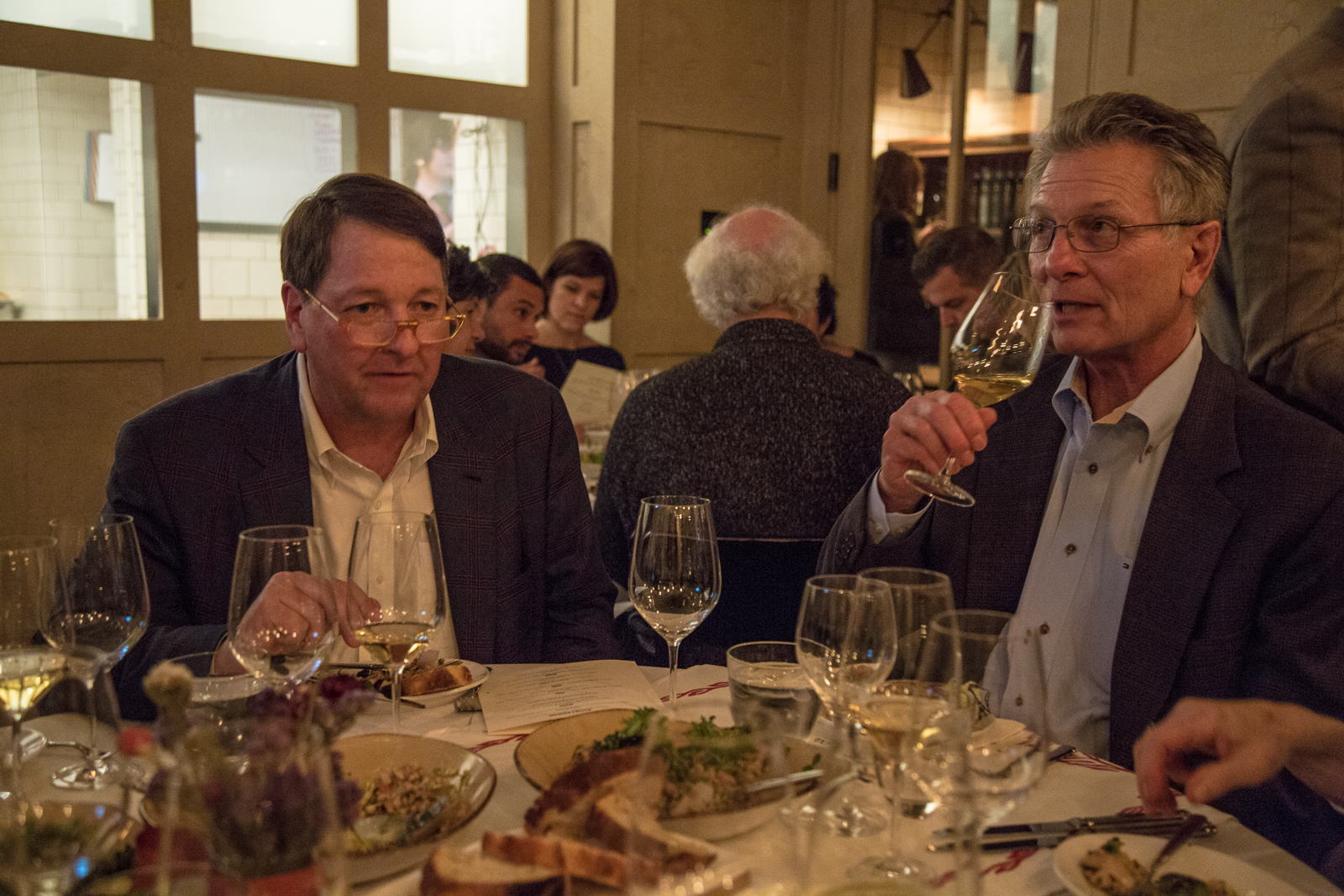 I am happily in a wine – induced haze after the first course. 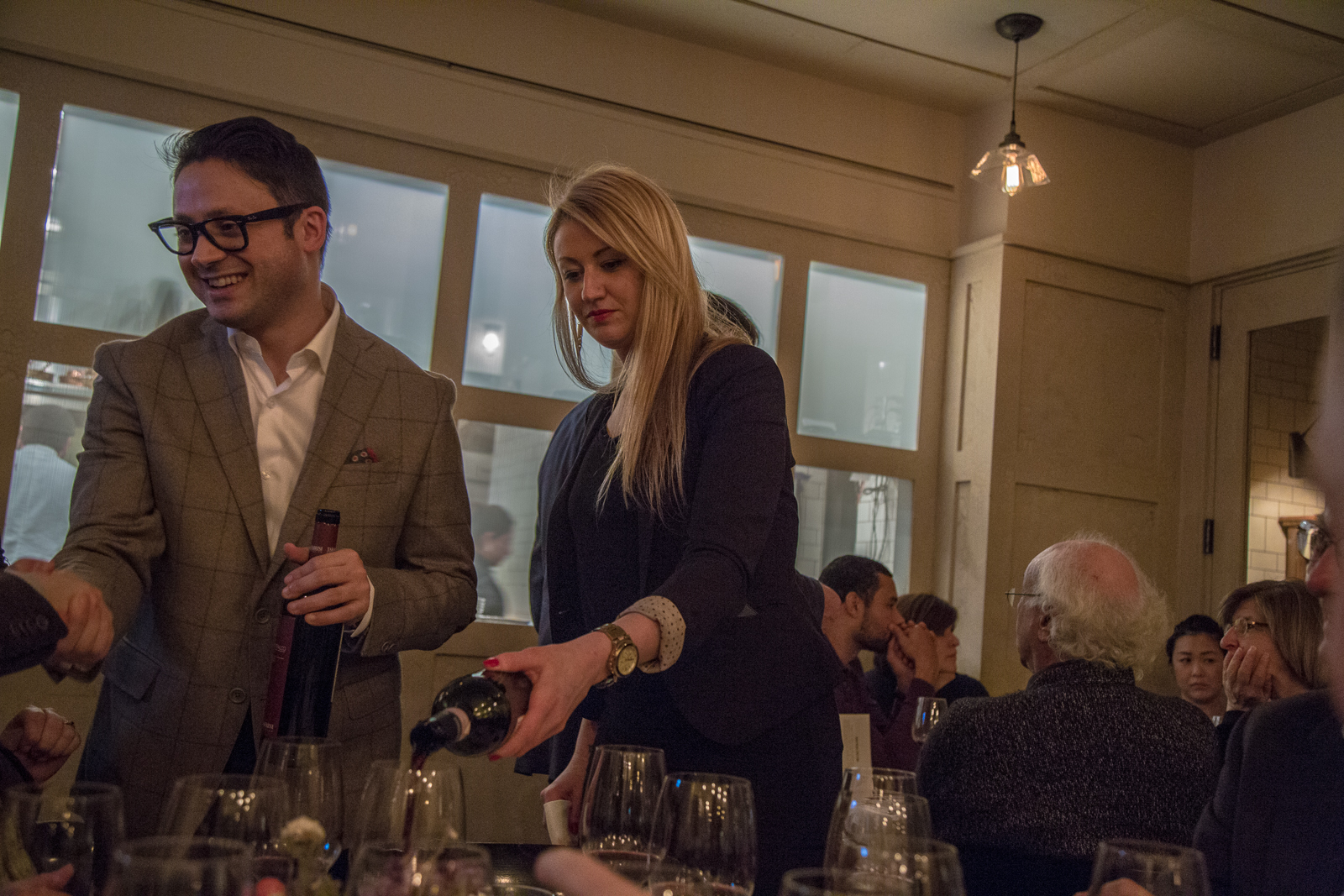 Daniele meets with guests to personally talk about his Sagrantino wine. 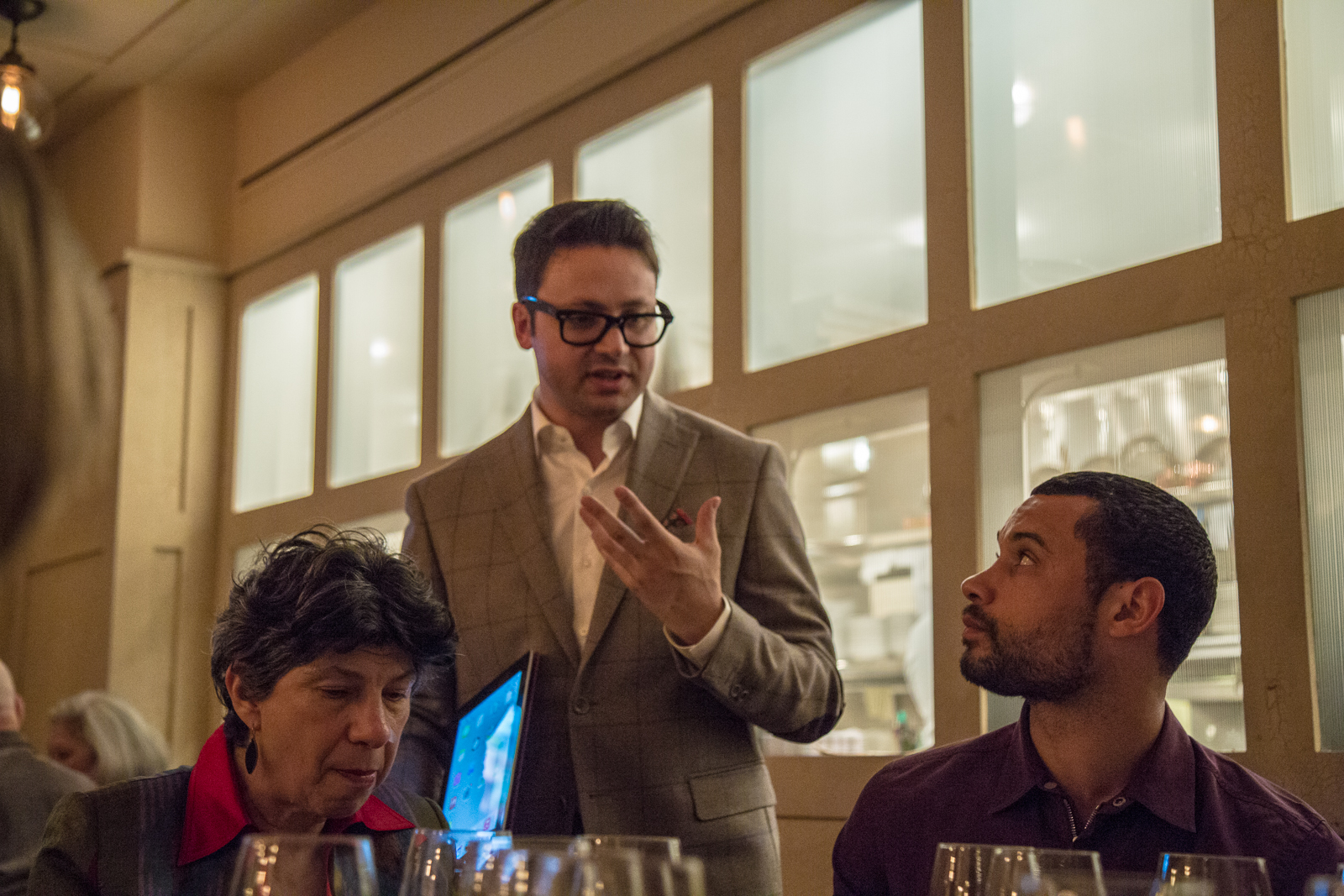 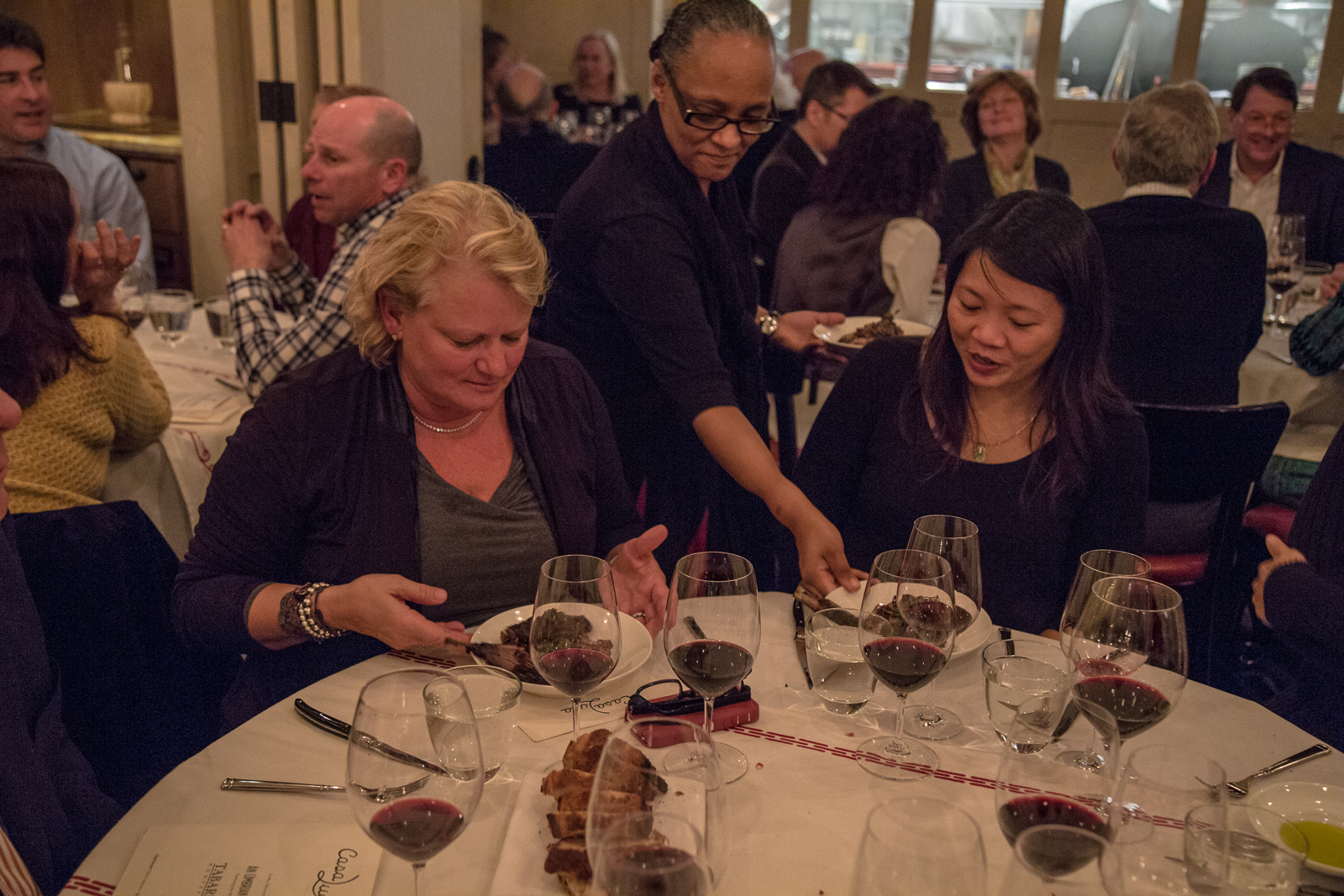 Suzy of Via Umbria gazes at the second course. 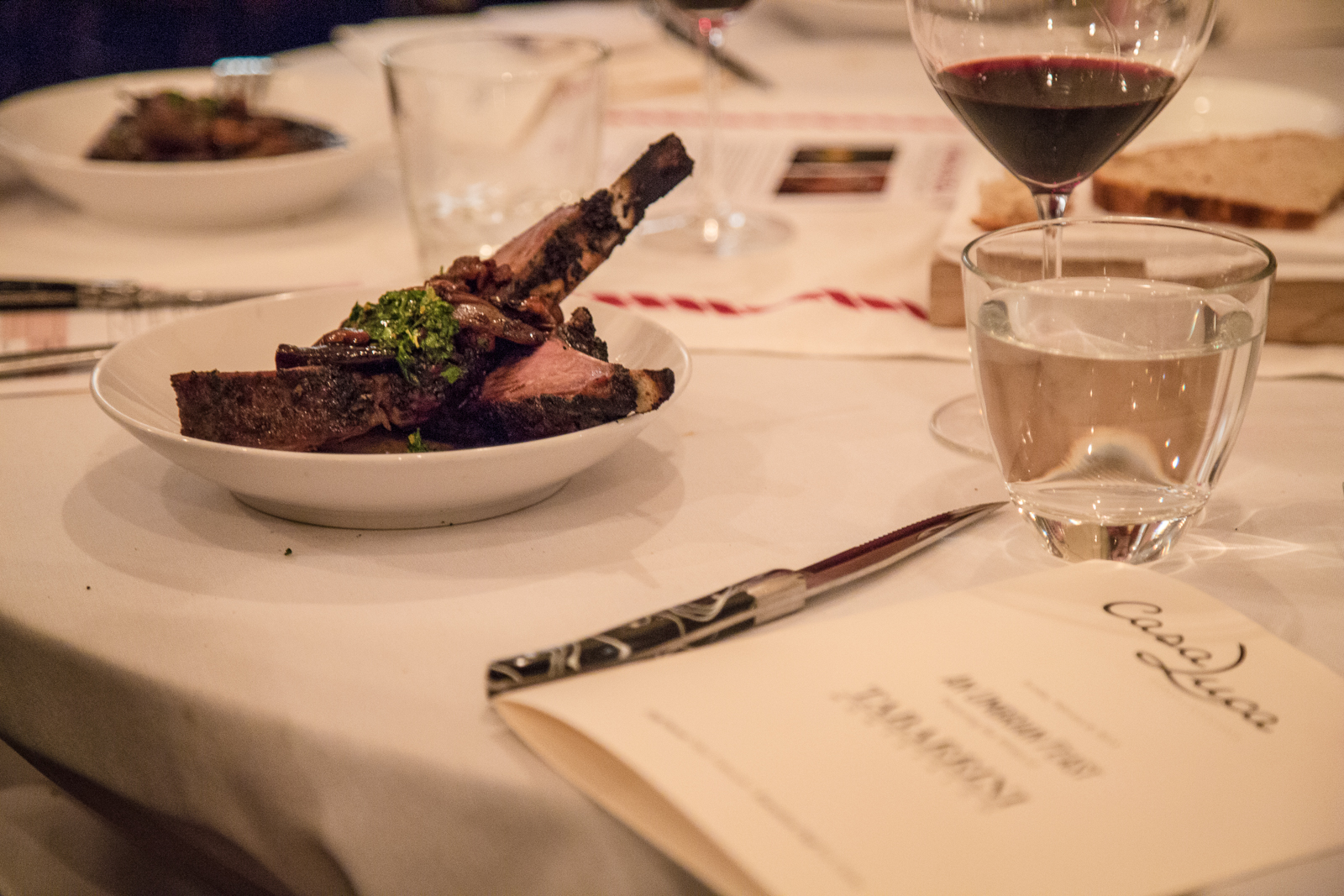 And so it was with heightened interest that I read Wednesday’s Washington Post’s Food section article on terroir (“You can’t define terroir, but you can taste it,” Wash Post 25 Feb. 2015, p. E5).  In the article Wine columnist Dave McIntyre noted that terroir “is a word with almost mystical charms for wine lovers,” holding that wine shows terroir “if it tastes like it came from somewhere.”  Wine exhibiting terroir contrasts with most wines, which McIntyre rightly points out taste “as if they could have come from anywhere.”  McIntyre opines that wine enthusiasts love the idea of terroir and wines that taste as though they could have only come from where they actually came from.  If love of terroir makes one a wine enthusiast, send us our membership cards.

Our relatively recent journey into the world of wines has been heavily influenced and shaped by the concept of terroir because the wines we have come of age with are wines that define the term terroir – Umbrian wines and in more cases (no pun intended) than not, wines from the tiny D.O.C. wine region of Montefalco.  Look up the word terroir in the dictionary and it wouldn’t be a stretch to think you might find a map of Italy with Umbria highlighted in red.

In Umbria and in Montefalco a number of factors – relative isolation, local consumption and a fierce pride in local culture (which includes their food and wine) – have led wine makers to produce traditional wines that represent the region, that utilize indigenous grapes (so long, cabernet sauvignon) and that pair sublimely with the region’s food.  Put simply, the wines of Umbria taste as though they could have only come from Umbria.  What a wonderful attribute for a wine to have!

If, like Suzy and me, you cut your wine teeth in a deep dive of a particular region’s wine (e.g., Bordeaux, Napa, Australia) your wine chops are highly developed but only with respect to a small sliver of the universe of wine.  This has truly been the case for us, and our next challenge in this relatively unusual situation has been to transfer and apply our Umbrian wine knowledge more generally to other regions.  And so we have been working to learn and appreciate the wines of California, of Washington State, of France.  It is a pretty good challenge to face.

Aside from the blessing of terroir, our Umbrian wine experience has offered us the blessing of accessible winemakers.  In Umbria winemaking has not been mystified and deified.  It is a simple act carried out by real people.  And these real people – farmers – don’t intimidate and try to make what they do into something it isn’t.  Instead they gladly invite you into their world, show you the grapes in their fields, talk to you about how they entice the best fruit possible from the vine.  They let you put your head in a stainless steel vessel to see grapes fermenting, to smell the yeast and the offed gasses.  They pour you a glass of cherry red juice that is still two to three years away from maturity, explaining how a winemaker can judge how this awful liquid will transform itself into sublime beauty. 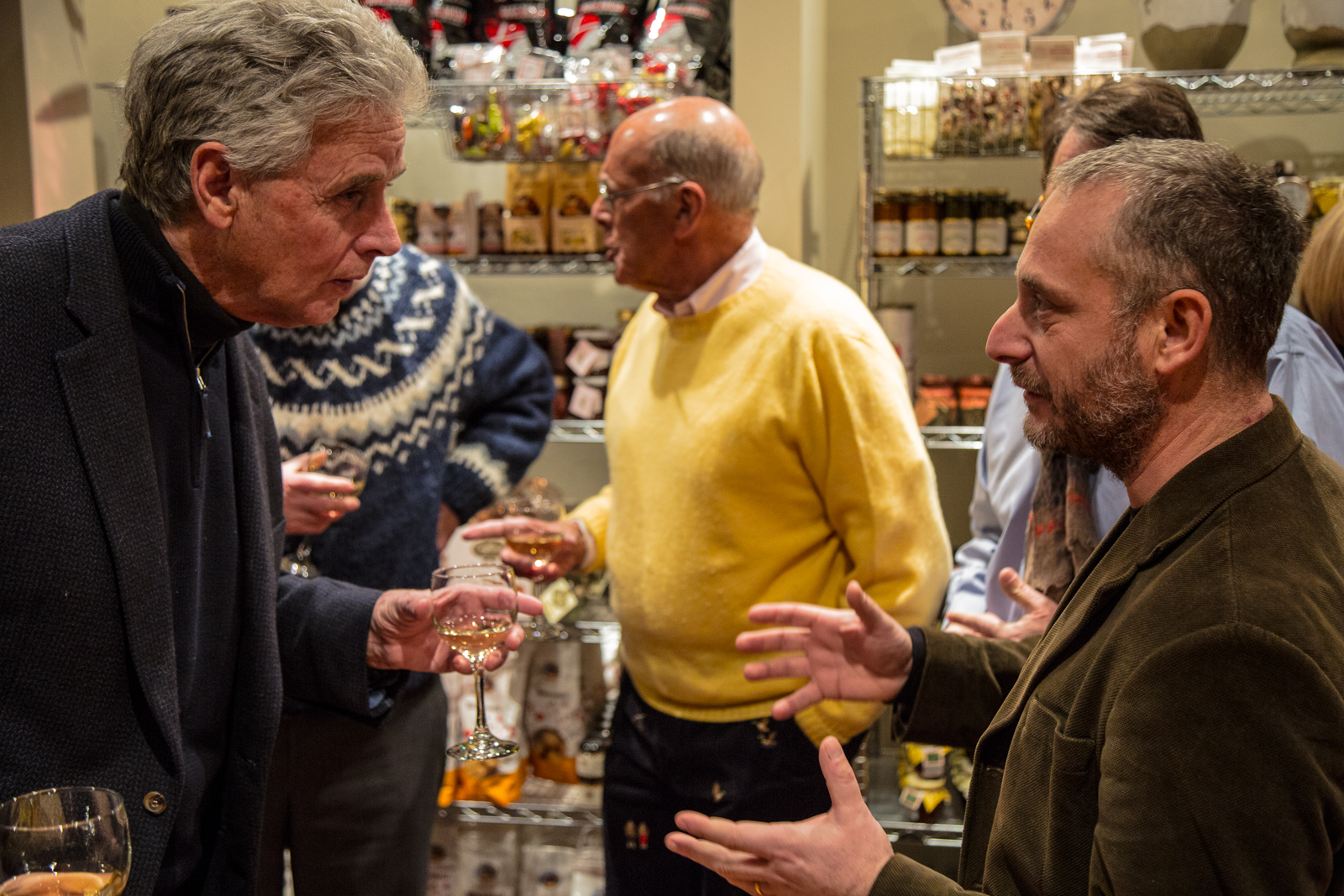 Roberto Di Filippo discusses his Grechetto with a guest. 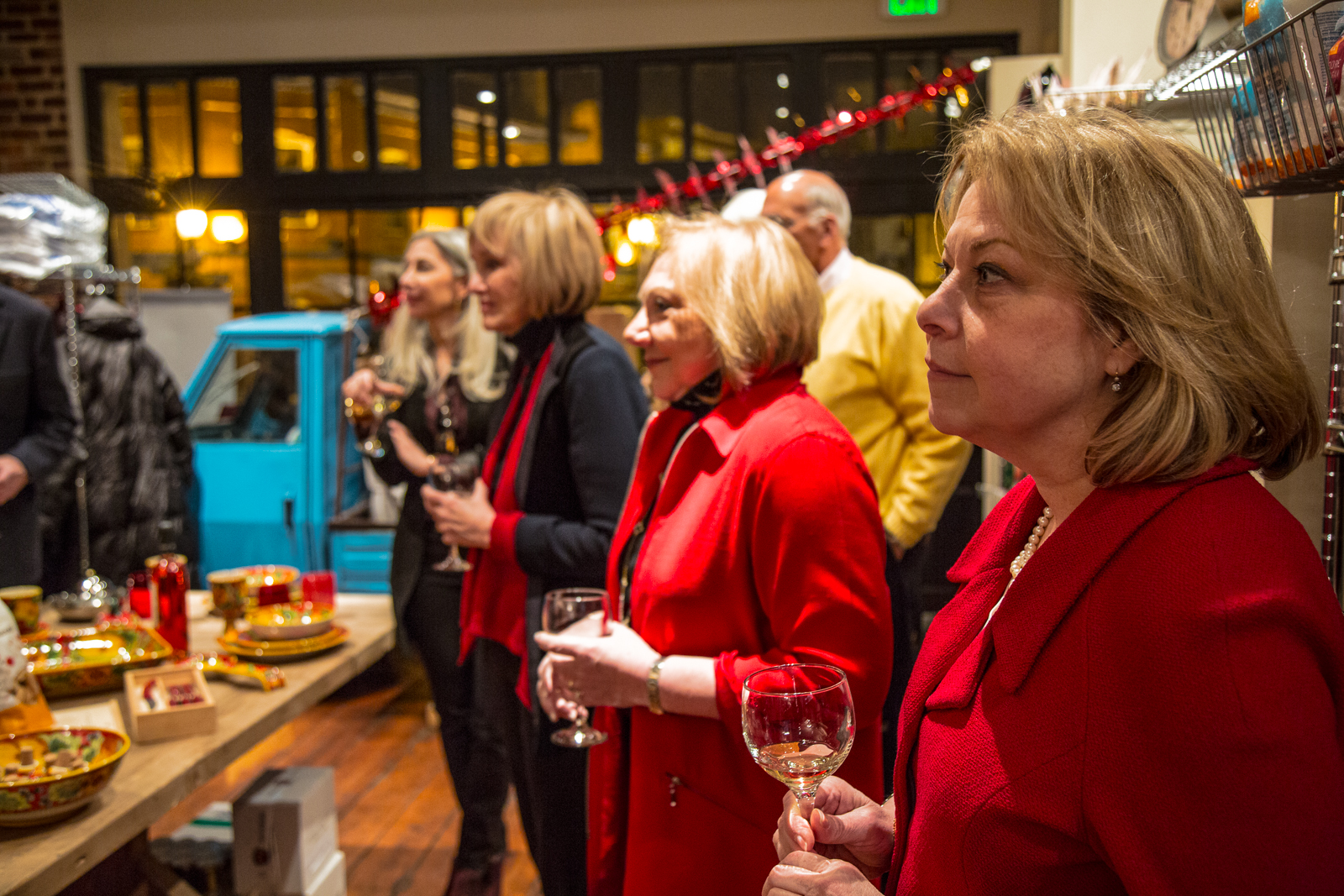 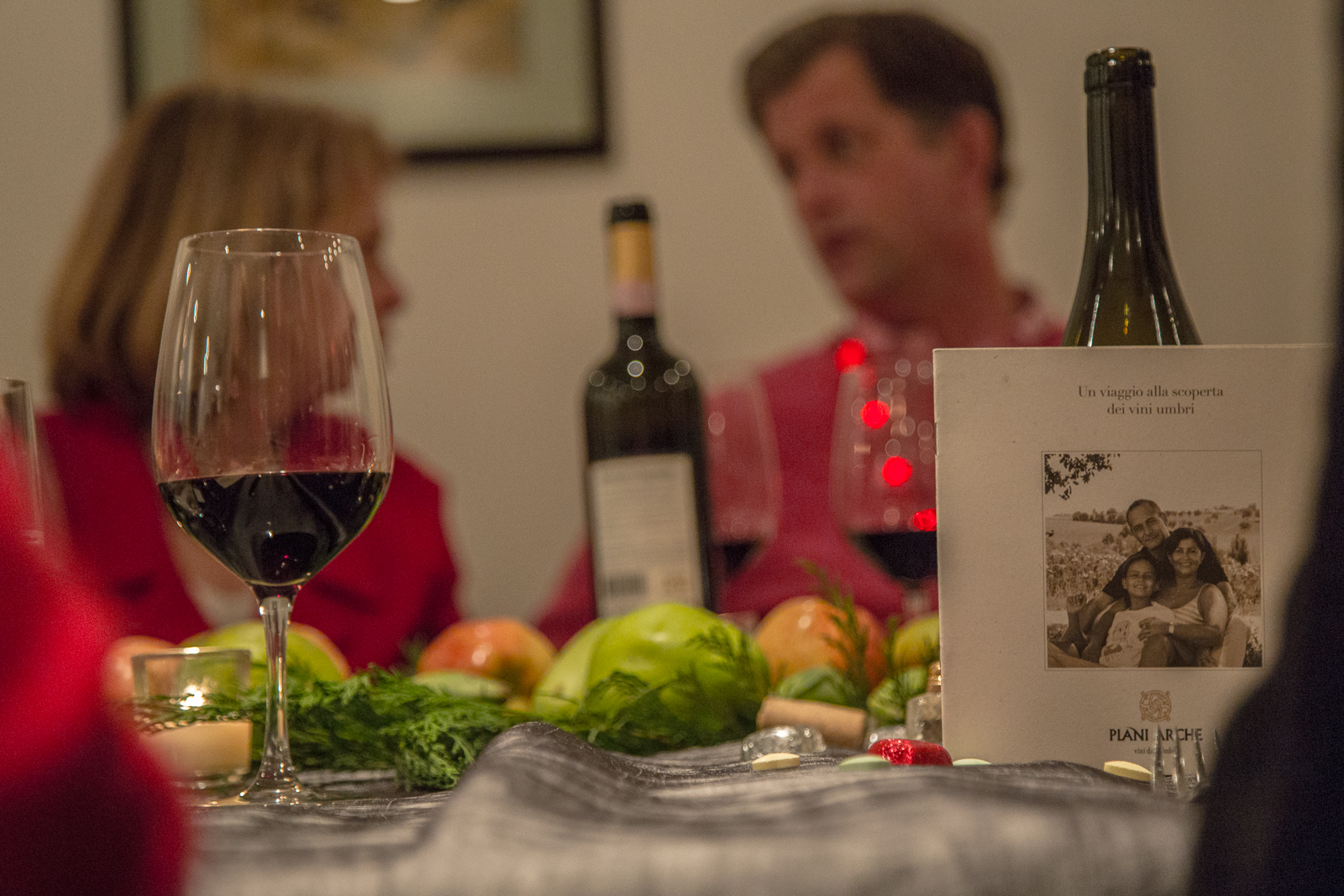 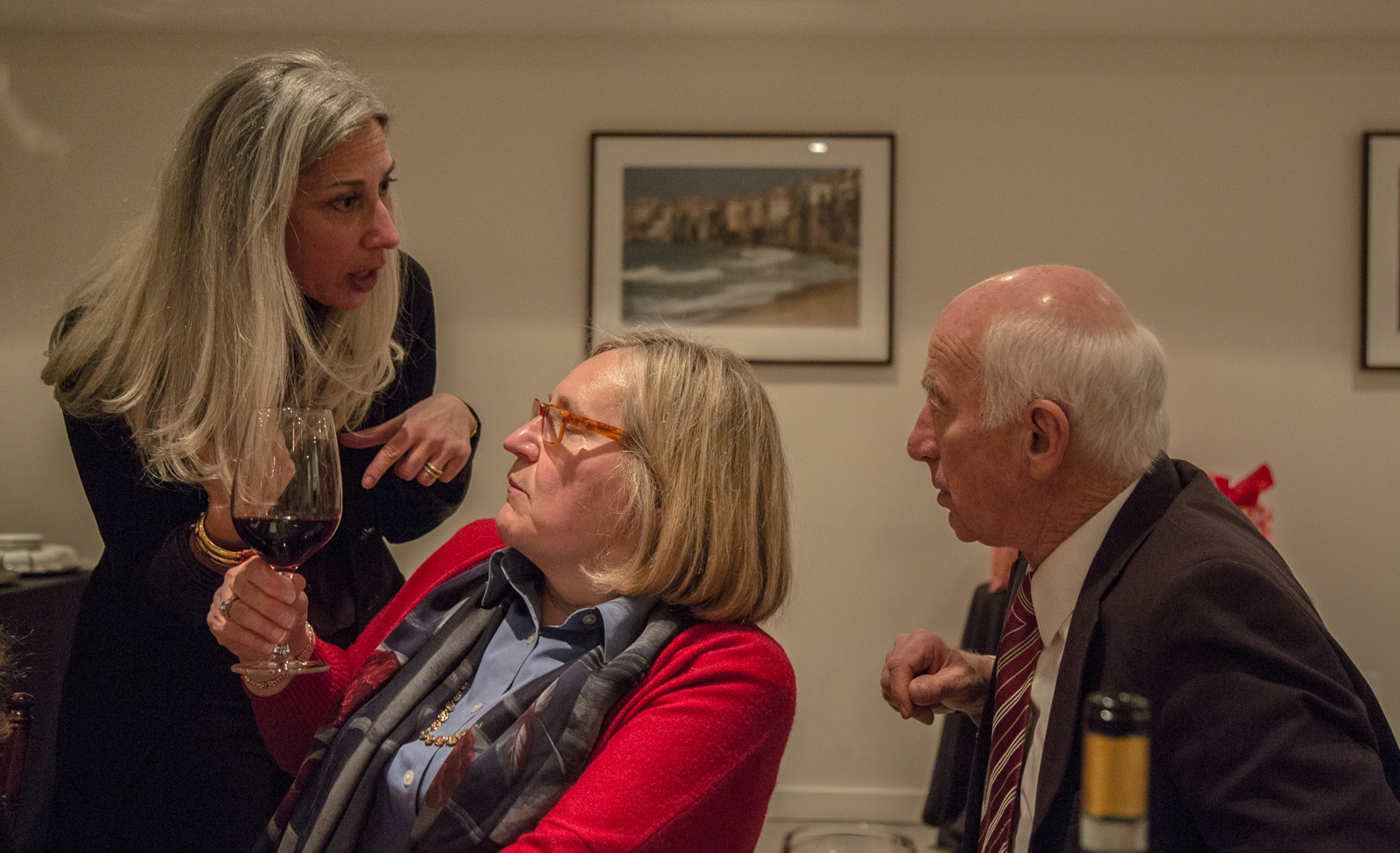 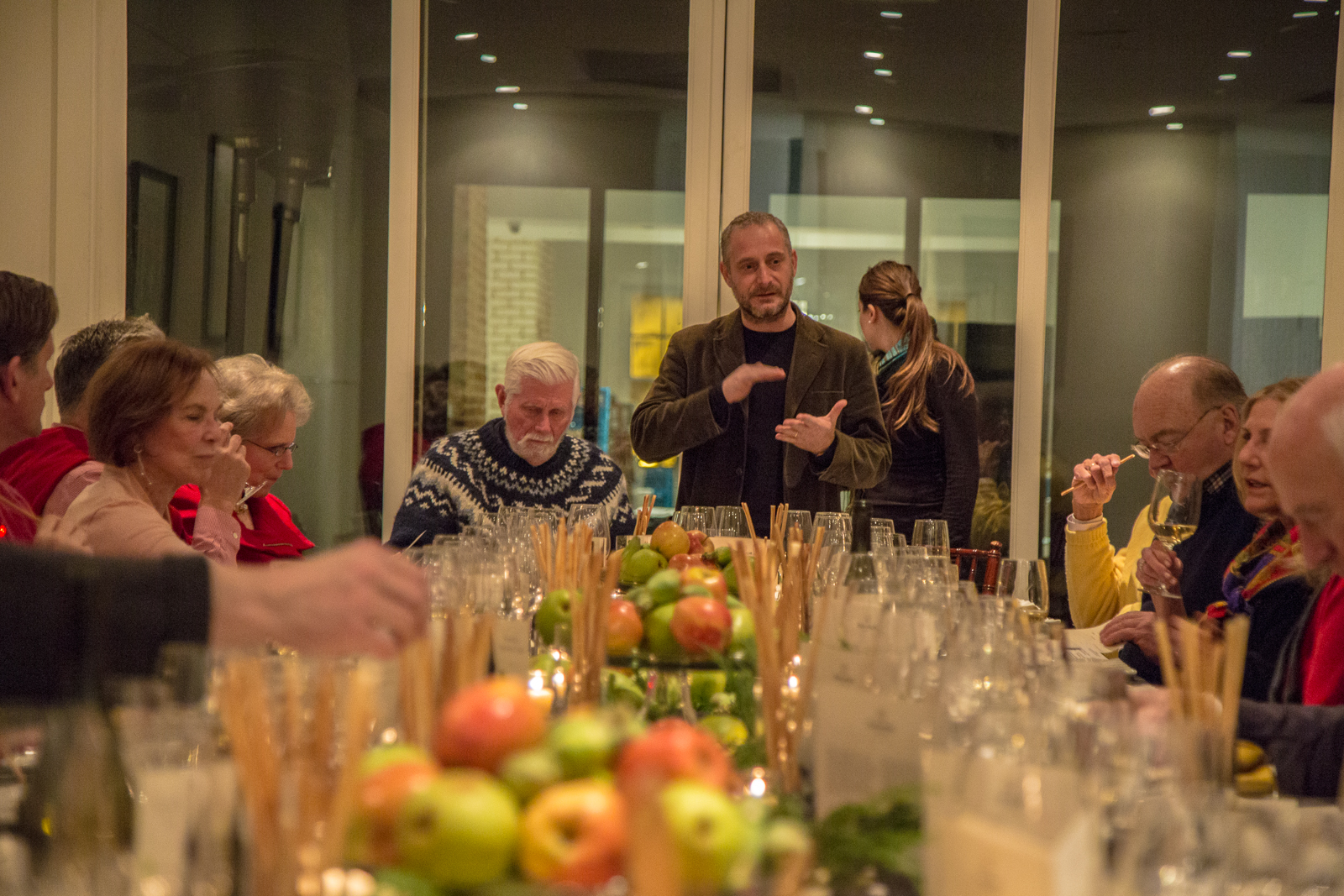 Roberto speaks from the head of the table in the Via Umbria Galleria. 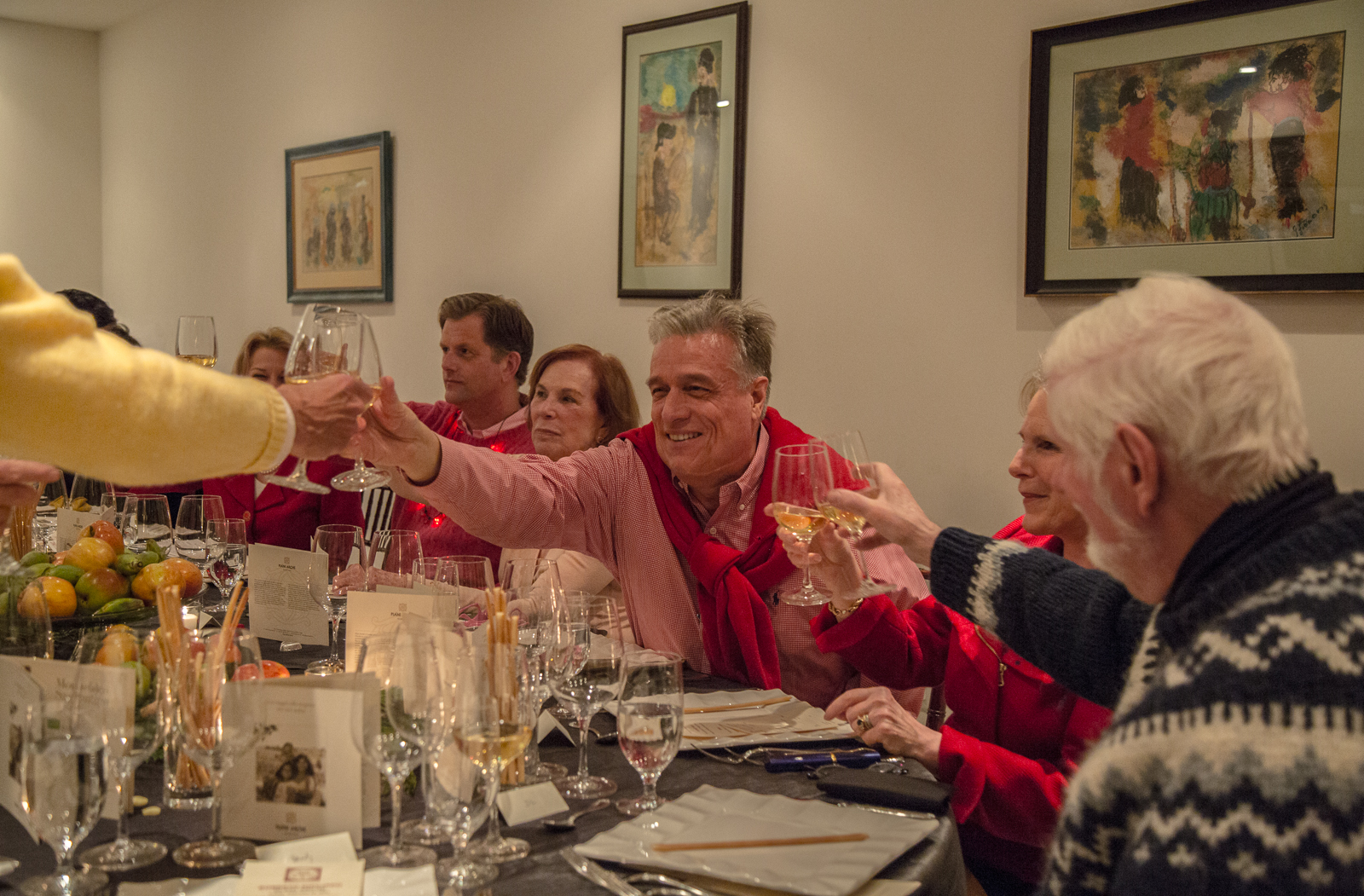 Terroir paired with access to real people, wine people.  It is something that sets Umbria and Umbrian wine apart in our minds, something that has made our journey along the strada dei vini unique.  And it has made the new year a truly enjoyable one.

We can’t wait to see how the next months unfold.

If you are interested in experiencing Umbrian terroir and Umbrian winemakers at their source, join Bill and Suzy on their first annual Vinopalooza wine tour, March 26-April 1, 2015.  For more information click here or call Suzy at (202) 957-3811.

For all those wine lovers Read more

As February gives way to March (and aren’t we all looking forward to the prospect of non-Arctic March temperatures?) I can’t help ...