Growing up, I always hated chicken. It was almost invariably dry and tasteless, unless of course it came battered and fried with a side of biscuits. I rarely ordered it in a restaurant, and rued the days when my parents would make some for dinner. As I grew older I developed an appreciation for the dark meat, which lead to the realization that the thing I was most opposed to was the dryness and blandness of the chickens of my youth. Now, having had access to and experience with great chicken I have realized that there are many other factors that go into cooking the perfect chicken, but for the sake of brevity let’s focus on the two major issues and breakthroughs that led me out of this dark, chicken hating place and into a brand new food world where we would want a chicken in every pot. 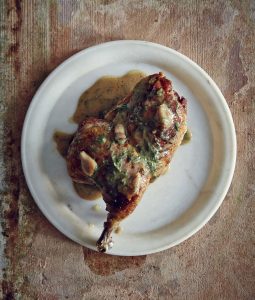 Well, not in a pot, necessarily. In fact, that’s probably my least favorite way to cook it but that’s neither here nor there. There are a myriad of things you can do to a chicken to help it along, beginning with a good brine, but again, that’s an issue for another time. For now, let’s talk cooking. You may have heard of spatchcocking, where the spine of the the bird is removed and the whole chicken can be laid out flat on the grill for cooking. Most food blogs bring up this method in the months of October and November as a quicker way of preparing a Thanksgiving turkey. This also has the added benefit of keeping the moisture in the meat, preventing your Aunt’s usual dried out turkey. Before I had even heard this word, however, I had come across a very similar method in a cookbook by celebrity chef Sean Brock. What he refers to as “Chicken Roasted Simply In a Skillet” comes there alongside garlic confit and pan sauce, is easily modifiable and made even simpler than the recipe says. All it requires is a cast iron skillet where halves of chicken are seared skin-side down for several minutes, flipped skin-side up and finished in a preheated oven. While his recipe is delicious, I’ve come to find that you can modify the seasoning to whatever you like, skip the step of weighing down the chicken, forgo the pan sauce–and as long as you stick to the technique of searing the skin you’ll have a hit on your hands. Cooking chicken like this traps the juices in the meat and, keeps it so moist and flavorful that it rivals the dark meat in tenderness. This is of course, not to defame your traditional roast or your barbecue grilled chicken, but why not try something new? It takes less time than a roast and is harder to mess up!

I close with the second thing that makes a big difference–the quality of your chicken. As with everything, you get out of a dish what you put into it, and if you start with a high quality product you’ve already won half the battle. In terms of quality of meat, there are a lot of buzzwords that get thrown around and associated with chicken. Organic, free range, hormone free, local, are incredibly common descriptors, but comprise only the tip of the classification iceberg. While I will say that no chicken is ever grass feed (so don’t count on that one) most of the words are actually relatively meaningless. Local can come from hundred of miles away, organic is a certification many producers can’t afford, hormone free chickens may have eaten feed that is laced with hormones or pesticides. That being said, in the grocery store it is relatively easy to see the difference between the factory chicken and the farm chicken. The factory chicken will undoubtedly be huge. The farm chicken will likely not be broken down–it will be available only whole until the butcher breaks it down for you. Our chickens are relatively local, coming from a cooperative of farms in Pennsylvania and upstate New York, and labeled as “naturally raised.” Almost intentionally meaningless, this phrase is in this case meant to communicate a commitment to letting the chickens live good lives. This means that while they don’t have the organic certification they eat mostly organic food, they may get some antibiotics when they are sick, but not as a part of regular life. And all this pays off, they are some of the best chickens I’ve ever been able to eat.

Cooking with quality meat will change your dish Read more

Growing up, I always hated chicken. It was almost invariably dry and tasteless, unless of course it came battered and fried with ...