BACON! Okay, now that I have your attention let’s have a little chat, because bacon is a bit more complicated than you thought. One of the few cured meats that is meant to be cooked, bacon is most famous in the United States for its place on the breakfast plate. To get there, bacon goes through a multistep process that can involve curing, smoking, and pan frying (ah, the sizzling). This bacon is usually belly, and is almost always smoked. In fact, most of the unique flavors between different American bacons come from the wood used in the smoking process. The tradition of bacon for breakfast comes from the British Isles, where the most common kind of “rashers” are cut from the loin (think more like Canadian bacon). Leaner than the belly, this is a bacon that is cut a bit thicker than in the American tradition, and is chewy and meaty–not crispy. Either way, it’s tasty. 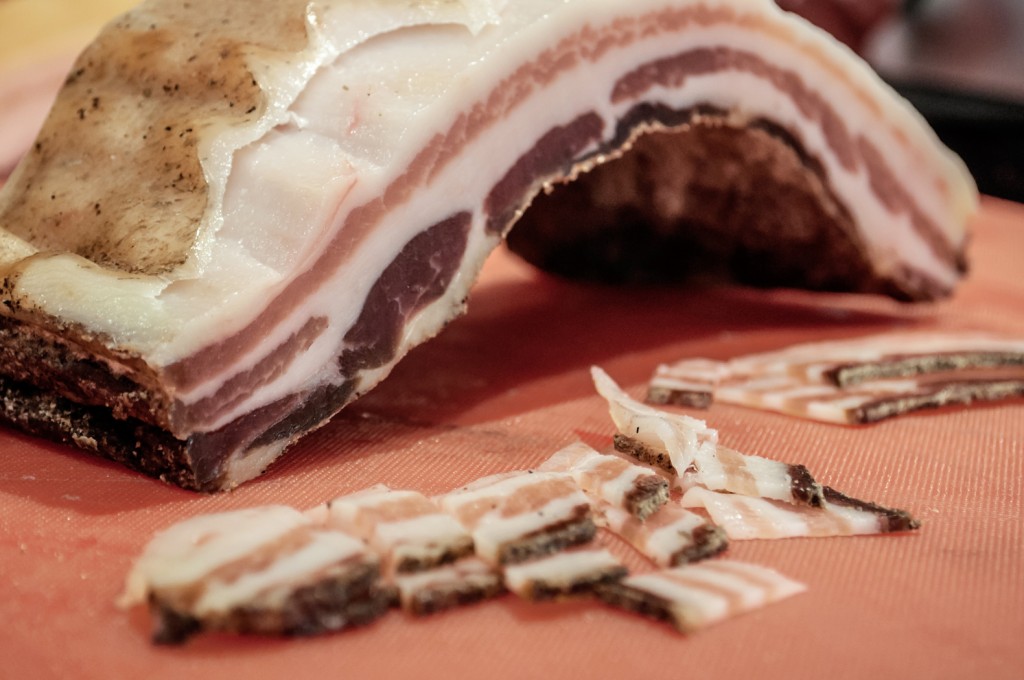 Here at Via Umbria, however, we also draw from the Italian bacon traditions: pancetta. Pancetta is the belly of the pig, cured into bacon just like here. The most crucial difference from the American bacon, however, is that it isn’t smoked and is sometimes rolled. In fact, most of the Italian pancetta you can find stateside is the rolled variety. Not so at Via Umbria; we primarily carry a “slab” of pancetta, that on a quick glance looks almost exactly like your typical breakfast bacon. This is not because the slab is different in any way from the rolled, just that better quality producers are mostly electing not to roll their pancettas. The use of the bacon is different too. Rather than slicing thickly and panfrying, you slice thin and eat raw. Or you dice and use as the base of an excellent sauce. 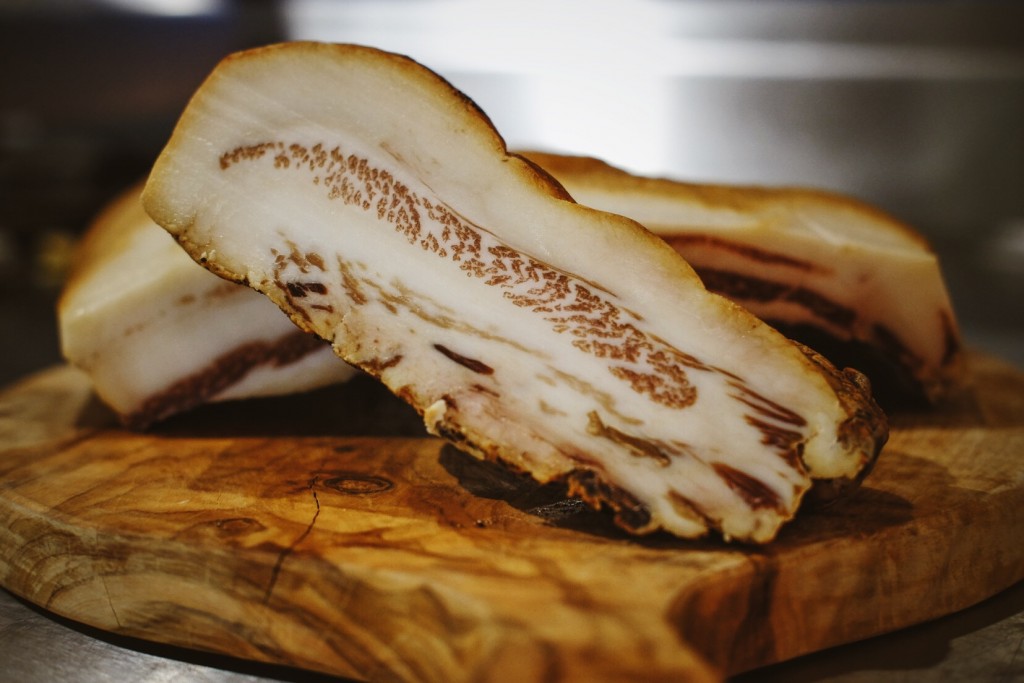 Bacon doesn’t stop there! In Umbria, and other areas of central Italy, you wouldn’t use pancetta. Instead, the choice is guanciale. Guanciale translates literally as cheek, and is produced in a fashion similar to pancetta, but using the jowl of the pig rather than the belly. It is usually fattier, and thus richer in flavor. I find that it is a superb addition to any charcuterie plate, the fat deliciously contrasts the meatiness of a prosciutto and the seasoned flavor of a salami. Also excellent for cooking, guanciale is the only real base of the carbonara and the amtriciana. American producers are catching on and making their own, sometimes putting their own American spin on it! You may have seen these on menus as “face bacon.” We carry one called jowciale, which is hickory smoked in Virginia and is fantastic when used to cook greens or pan-fried and put on a BLT or a burger.

However you like your bacon, we’re ready to meet your needs! Come have a chat with me at the butcher counter and we’ll make sure to have one that has you salivating.

Bacon is more complicated than you thought Read more

BACON! Okay, now that I have your attention let’s have a little chat, because bacon is a bit more complicated than you ...