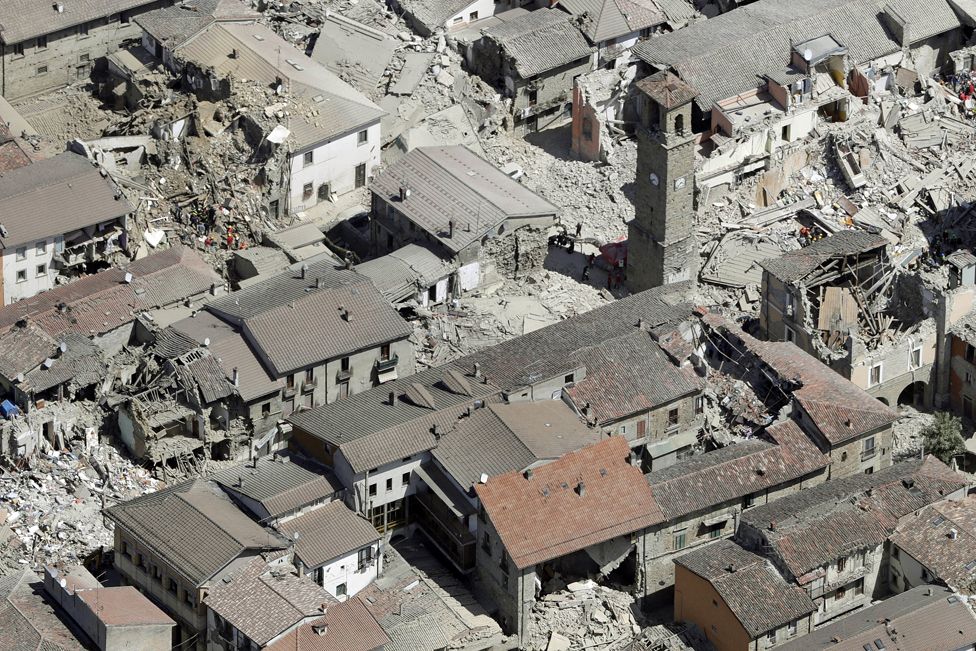 Mother Nature — a term that is such a complete contradiction.

Nature, the most powerful force in the universe is indifferent to those it impacts.  When nature provides us its bounty – sustenance, panoramic vistas, long, rich, rewarding lives – we marvel at its power and project benign intentions to it, honoring nature as we would our mothers.  When it shows us its awesomeness but spares us the impact – a distant lightning storm or an erupting volcano – we stand in awe of it.  But those powerful forces can also be arbitrary, random and deadly.  And when they are unleashed against us or count us as innocent bystanders, we simply tuck away those experiences in a compartment, refusing to challenge our notions of a benign “mother nature” and see it as a “one off” phenomenon.  Nature neither loves us or hates us.  It simply is.

A week ago, in the early morning hours of August 24, the people of central Italy, including our friends and neighbors in Umbria, the other place we call home, were awakened by the terror of what the Italians call a terremoto.  A magnitude 6.2 earthquake in central Italy leveled buildings, buried under rubble hundreds of inhabitants that had no chance to escape their homes and obliterated whole villages.  In the week since the earth shook, the death toll has climbed above two hundred and those left homeless and hopeless has reached the thousands.

Early reports placed the epicenter of the quake near Norcia, a town known throughout Italy as the capital of cured meats, the place where pork butchery was invented and where early medieval surgeons were trained and sent out into the world.  Like many of the other towns making the news, Norcia is a place with which we are intimately familiar, for it is literally in our back yard.  Those reports also mentioned Perugia and other towns that make up our Italian world, but the real destruction was felt further south, along the border between Umbria and Lazio, an ancient region originally populated by the Sabines.  We are familiar, too with this area, which though rarely visited by tourists is a place we have traversed and explored often.  It is a rugged, sparsely populated area dotted with small, rough, isolated villages.  Many of those villages, happily existing alone and cut off from the modern world have been decimated, their remoteness and isolation making rescue and recovery operations that much more difficult.

The impact on our property and our orbit was minimal.  Guests staying at our farmhouse in the village of Cannara reported no damage or injury, although the movement of the ground, a side to side rather than up and down motion, apparently sloshed a great deal of water from our pool.  Thankfully our friends and acquaintances who hail from the other nearby ancient towns that dot this region – Perugia, Deruta, Montefalco, Bevagna, Spoleto – came through relatively unscathed.

Not so the inhabitants from Amatrice and the neighboring town of Accumoli.  The devastation there was so great it led the mayor to exclaim “half the town no longer exists.”  Images of the destruction are gut wrenching, collapsed buildings covered in a thin monochromatic gray coating of dust, looking like the setting of a post-apocalyptic film.

The rebuilding and recovery efforts have already started but experience tells us the work will never truly be done.  Worse than the death and destruction of properties and historic landmarks, if there is such a thing as worse in this regard, is the complete devastation of the social fabric that holds people together, that gives their lives purpose and meaning, that defines their lives as theirs. Suzy and I have witnessed firsthand this complete wiping away of the social structure, this destruction of lives and a way of life.  We did so several years ago when we visited a friend in l’Aquila, the site of the last major earthquake in Italy. There we saw a town that was more maintaining itself than rebuilding itself, its buildings standing but empty, like a Hollywood set.  Even though a couple of years had passed since the big quake, life there was different, with a palpably gaping emptiness, a hollowness in the routines of life brought about not by the terror of being shaken awake in the middle of the night or having to deal with the death of neighbors and family, but rather by the loss of place and routine – the lively piazzas and the nightly passagiata through the street.  Restaurants had reopened, not in the the city centro, but in makeshift FEMA-type trailers that ringed the city.  Makeshift attempts to rebuild the past social life that were still makeshift when we visited l’Aquila years later.  Attempts that seemed not to be gaining traction.  The l’Aquila we visited was as raw, fragile, damaged and hopeless as it had been the day after the quake.

A town or a village, we learned then, is much more than just its buildings or just its people. It is the intersection of the two that animates the place and the people and it is that intersection that was shaken and torn and damaged in certain corners of Italy last week.  The buildings can be reconstructed or replaced.  The victims can be mourned and eulogized.  But the survivors must be cared for too, for their lives – not just their immediate surroundings but the entire social network that had previously connected them to something bigger and better and more meaningful than themselves – has been reduced to rubble no less than their homes and places of work have been destroyed.

And it is only by feeling its absence that we can truly appreciate the power that this connectedness wields over our lives.  Indeed it is this connectedness – to our families, to our communities, to nature and its rhythms, to simple, elegant beauty, to our past, our traditions and our history – that animates our lives.  It is the duality of us being individuals and at the same time being part of a whole that in the end defines our lives and gives meaning and purpose to it.  Independence and interdependence coexisting and existing in the same space and time.  At this moment it is essential that we restore the quake victims’ independence – rebuilding their homes, caring for their injured, and mourning their lost.  But restoring their interdependence – rebuilding a social structure that developed organically over centuries in a place and because of the nature of that place, is a much more difficult but no less important part of our work as well.

Planning is underway at Via Umbria for a series of events to raise funds for earthquake relief efforts. Please watch this space for further details.  We hope you will join us in providing support for relief efforts and funds to assist the residents of this devastated area rebuild the lives and way of life that were literally shaken apart in the middle of the night a week ago.  And we hope you will remain afterwards, to help rebuild and support communities that have been no less ruptured than the people.

The after effects of an earthquake in Central Italy Read more

Mother Nature -- a term that is such a complete contradiction. Nature, the most powerful force in the universe is indifferent to those ...