Not too long ago, I had my first experience with frenching a rack of lamb. For those of you who don’t know what that means- frenching is a technique in which you “beautify” the meat by exposing the rib bones, thereby making the chops more attractive. Nearly every rack of lamb in the grocery store, as well as beef ribeye, and pork loin goes through this process.  While it does indeed make the chops more attractive for plating, and removes quite a bit of fat from the dish, as I was removing the “extraneous” meat from the lamb bones, I felt a pang of sadness. How much goodness we were wasting! Succulent layers of meat and flavorful soft fat was all going to end up in the trash can just for the sake of appearance. 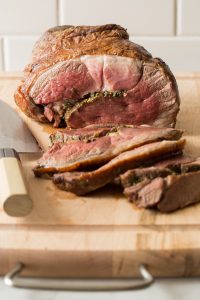 Flash forward a few months and I found myself eating in a small restaurant (the where and when of this meal isn’t important) and noticed a framed article from the Washington Post Food section on the wall. The article was an interview with the restaurant’s chef and included a recipe for a lamb roast, the photo of which looked more like a porchetta than any lamb roast I’ve ever seen. But something seemed familiar about it and I couldn’t shake that feeling. When I got home I opened up a few of my meatiest cookbooks and butchery books and found that same recipe in a pop up in few different places- one of which went so far as to call it a lambchetta. This particular roast was a rack of lamb, but rather than remove the meat from the bones and waste pieces of perfectly good lamb, this roast was based on the premise that only the inedible part of the lamb should be discarded: basically, cut out the bones rather than the meat. What this leaves you with is a “flap” of meat, which is essentially the lamb’s belly, which you then season and roll around the lean loin (the part you are used to seeing as the lamb chop). The first time I made it for myself I kept the seasoning simple, using only salt, pepper, red wine, garlic, and rosemary, but you can really go wild with flavors here. The simple seasoning created flavors that were out of this world, but next time I have visions of testing out a yogurt and feta marinade on the inside.

Lambchetta love story aside, this isn’t the end of frenching meats for my case but I am intrigued by and committed to trying out new ways to avoid waste. With this track record, I think that I may be able to stumble into some pretty incredible flavors this way. So why not join me? Stop by the counter and let me know what unique recipes and preparations you’ve tried and love, let’s brainstorm new ways to create amazing dishes, or just give me a call and I’ll make you a lambchetta that will change the way you eat lamb forever. Either way, I have a feeling that the next few months are going to be pretty tasty.

Not too long ago, I had my first experience with frenching a rack of lamb. For those of you who don’t know ...