This week, or weekend, rather, Suzy and I headed west to visit our son who lives in Oakland.  Preferring to escape the city for the weekend, we headed north to Sonoma wine country, with a too-brief visit to beautiful Point Reyes on our first day.

About an hour’s drive from San Francisco and Oakland, Point Reyes seems far more distant.  The seashore, which is a national park separated from the mainland by the Tomales Bay, is actually part of the Pacific continental plate, nestling against the North American continental plate in the narrow bay.  The landscape is breathtaking, mountains giving way to estuaries and beach, the Pacific Ocean churning in the distance.  We made a quick visit to the National Park and were able to see baby elephant seals warming their bodies on the sandy beach with their mamas.  Not your typical DC vista.

We also took in a visit to nearby Marshall and celebrated our arrival on the west coast with an outdoor lunch of raw oysters, pulled from the Tomales Bay just in front of us by the Tomales Bay Oyster Company.

But the highlight of our first day in California was our visit to the nearby Giacomini dairy, the family owned home of the Point Reyes Farmstead Cheese Company.  We spent the better part of a couple of hours touring the farm, learning about their cheeses, their herd, their philosophy.  It was a great start to our west coast sojourn.

The Point Reyes Farmstead is open for public visits, but only by prior arrangement.  A sign announces the Giacomini Farm, but gives no hint that the farm is associated with the well known and even better regarded Point Reyes Farmstead Cheese Company.  From the main road, the Route 1 that meanders along the Tomales Bay, you see only rolling farmland, verdant green at this time of the year but burnt brown during the summer.  Wandering along the private drive you eventually summit a hill below which extends the farm in all of its glory, hidden from sight of the highway, occupying a vast expanse of pasture and numerous sheds, ponds, cheesemaking rooms and offices and a visitor/education center. This may be a family run business, but it is a vast enterprise.

Our hourlong tour of farm focused mainly on the stars of the show, the herd of 900 or so cows that provide the milk that is made into Point Reyes’ dozen or so cheeses.  The cows are health and happy – lovingly cared for in a facility that is clean, tidy and odor free.  It is hard to imagine that you are actually on a farm.

Sustainability and environmental sensitivity are incorporated into all aspects of the business.  Of particular interest is the methane recycling system that turns the cows’ solid waste into energy that powers the vast majority of the operation before being returned to the fields as fertilizer.  It is just one of the smart, one would say elegant approaches to this business that shows it is being managed from the heart as well as the mind and ledger.

But the real proof is in the pudding, or in this case cheese.  We have long been fans of Point Reyes’ blue cheese, their flagship offering which is still made entirely on premises at the family farm.  Our swag bag that we were sent home with included a healthy portion of blue but also their delicious gouda among others.

That evening, after we had checked into our lodging for the night, we enjoyed a home made cheese board (apologies to our cheesemongers back in DC who are a bit more artistically inclined) featuring our samples from the tour, as well as a few others we picked up in a local market.  It went down oh so well, rewarding us with great flavors that were bolstered by the excellent memories of our visit to the Giacomini’s dairy.

A tour and tasting at Point Reyes Farm Read more

This week, or weekend, rather, Suzy and I headed west to visit our son who lives in Oakland.  Preferring to escape the ...

Early last spring, my dad and I attempted to go spring skiing out in Deep Creek, Maryland. Rainy and foggy with lots of slush and mud, we were not entirely successful in our sporting endeavors. It got to the point where one day we looked up at the slopes, and decided to go to the movies instead. Let me tell you, you know the conditions are really bad when the best option is to watch a sappy, poorly written sports movie in an empty theater with sticky floors and the distinctive aroma of old popcorn clinging to the walls.

Even though the weekend itself didn’t exactly go according to plan, it was far from a bust. First of all, I got to hang out with my dad (hi Dad!), which was, as always, a great time. And secondly, I stumbled upon FireFly Farms.

We were on our way out of town when we decided to stop and get some snacks for the road. Driving through the small town of Accident, the FireFly Farms Creamery and Market sign caught my eye. I’d heard the name bantered about by various mongers in DC, and knew that they made goat cheeses. And, well, you guys know me – I’ll jump at any chance to try some new cheeses, so we stopped.

After tasting through a bunch of their gorgeous, goat’s milk cheeses, I settled on my favorite: Mountain Top Bleu. Made in the Valencay style, these beautiful, surface ripened pyramids are a perfect gateway blue – mild and creamy with just a hint of funk. The piece that I got that day was just the way I like my soft cheeses to be – ripe, oozy, and full of flavor. During the two and a half hours it took us to drive back to DC, we easily devoured the entire thing.

I’ve learned a few things since that inaugural visit to FireFly. Firstly, although Mountain Top Bleu is one of FireFly’s original three cheeses, it was initially made by accident. It came into being when a bloomy-rinded cheese was cross contaminated by a nearby blue. Instead of throwing the contaminated batch away, the cheesemakers created this beautiful hybrid. And it’s a great thing that they did: Mountain Top Bleu is the most awarded cheese in the FireFly repertoire. With twenty individual honors to its name, including a bronze medal at the American Cheese Society conference this past summer and multiple World Cheese awards, this cheese is certainly no mistake. Saveur Magazine even named it as one of the top 50 cheeses in the nation. 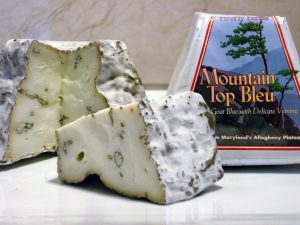 I was also impressed to learn about FireFly’s commitment to sustainability, both with regards to the farmers that they partner with and to the environment. FireFly is a small cheesemaking operation on the Allegheny Plateau region of Maryland, and they use milk from six goat farms within a 30 mile radius of their shop. By working closely with these farmers, and implementing a mutually beneficial contract, Firefly assures that the farmers are committed to “humane animal husbandry and restrict the use of antibiotics, hormones, and animal feeds that have been treated with chemical or synthetic fertilizers”, while also paying them a fair price for their milk that doesn’t penalize producers for “under-production” in winter months, nor “over-production” in summer months.

Additionally, FireFly is very conscious of their energy consumption. Instead of using energy-hungry machines, they’re committed to handcrafting and wrapping each of their cheeses. Furthermore, as of the summer of 2015, one third of the energy used by FireFly comes from their newly installed solar panels.

It is my great pleasure to announce that not only will Mountain Top Bleu be Via Umbria’s October Cheese of the Month, but that FireFly Farms founders Mike Koch and Pablo Solanet will be joining us for our monthly Cheese Party! Please join us on Wednesday, October 5th to eat, drink, and learn all about this wonderful local cheese and these awesome cheesemakers!

A visit to FireFly Farms Creamery in Maryland Read more

Early last spring, my dad and I attempted to go spring skiing out in Deep Creek, Maryland. Rainy and foggy with lots ...