A ten minute cab ride from Rome’s Leonardo da Vinci Airport is the seaside town of Fiumicino, for which the airport is also named (Rome Fiumicino or FCO to the seasoned traveller). As most flights to the US depart from FCO in the morning, overnighting in Fiumicino the night before one’s return flight can be a good alternative to a pricy hotel room in Rome. And given this fishing village’s impressive roster of restaurants, it can be an excellent way to celebrate your send off with a memorable meal.

But Fiumicino can be more than just a place to kill time and have a good meal. With Ostia Antica, the main port of Imperial Rome just a few minutes away and the town itself steeped in history, beaches and an impressive commercial fishing fleet, those seeking to escape from the bustle of Rome for a day or two would be well served to encamp in this delightful, if overlooked area.

Suzy and I took this message to heart this week, starting our Italy adventure with two days in Fiumicino to decompress and get over jet lag. We had visited the town on previous trips, but only for dinners, opting on those previous visits to stay at the airport’s Hilton hotel and taking a short taxi ride to the Via della Torre Clementine, the road that runs along the town’s wharf, from which the fishing fleet daily heads to sea. Across from the wharf stretches seafood restaurant after seafood restaurant.

Over our two day visit to Fiumicino we had three excellent seafood meals. Two were at restaurants along the main drag – the Ristorante Fronte del Porto and la Perla Ristorante. There we ate deliciously fried fritto misto, an assortment of small fried fish, shrimps and calamari, as well as some exquisitely fresh crudo, or Italian style sushi, thinly sliced raw fish, typically marinated with light extra virgin olive oil and seasoned with subtle sea salt. Needless to say, the fish served in these restaurants is about as fresh as it gets. Talk about zero kilometers – it literally has to travel a hundred feet from the boat to the table.

But for a special treat, for great seafood in a beautiful setting and with top notch service, hop over to Bastianelli al Molo. Housed in a whitewashed modern constructed building at the very end of the pier, al Molo (at the pier) is the cream of the crop. We enjoyed a leisurely (four hour) lunch there our second day, a fresh, gentle breeze rolling off the sea and cooling the ferocious heat of the summer.

We started our seafood odyssey with a half dozen oysters from France, disobeying the “months with an r” rule that proclaims that you should not eat oysters in hot weather months. We had been disabused of this notion on a previous trip to France and besides, this is Italy, where you’re not being a good citizen if you don’t break most of the rules. 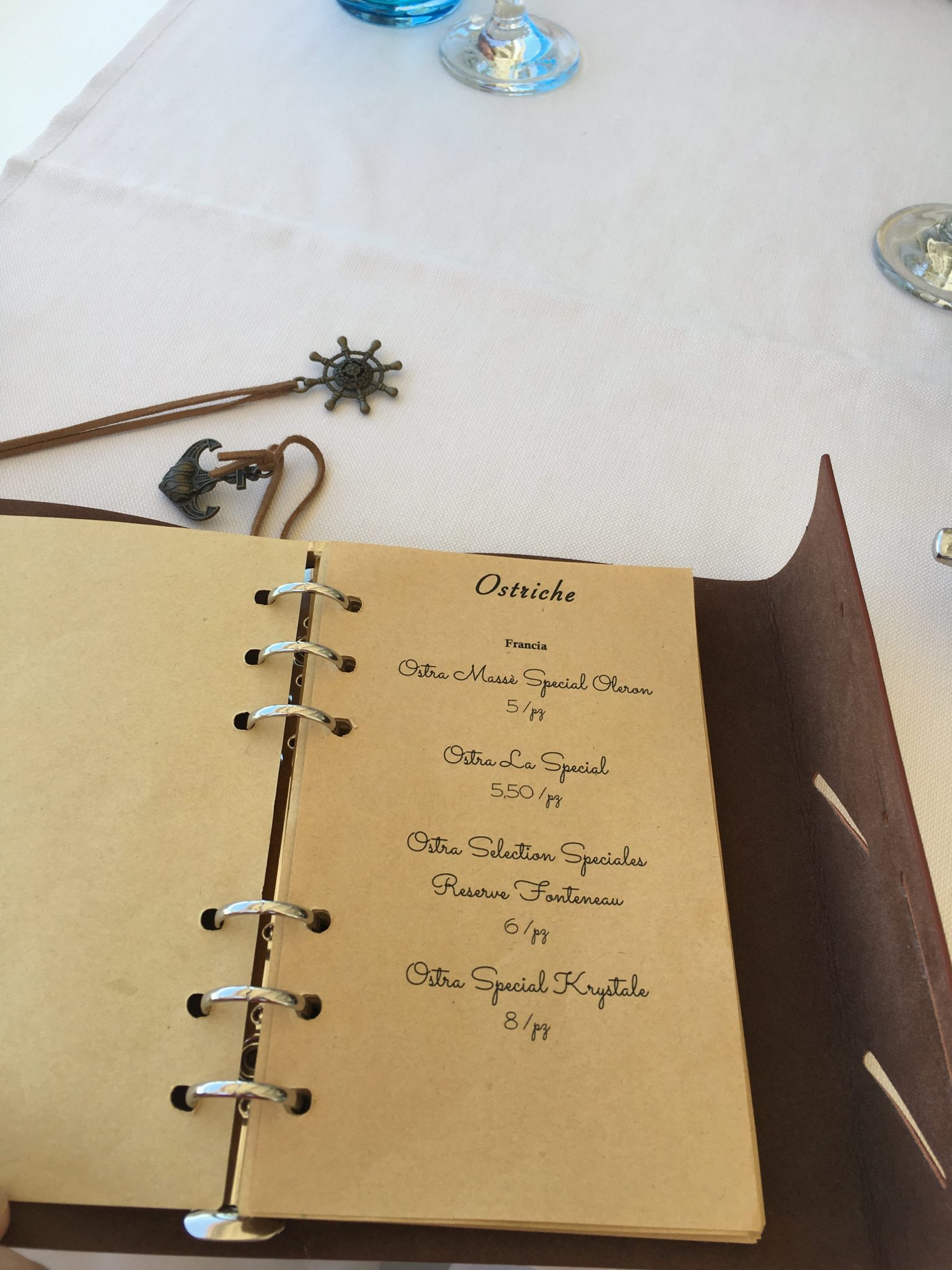 We followed the oysters, which we enjoyed with a bottle of Lis Neris “Lis” wine from Friuli (pinot grigio-chardonnay-sauvignon blanc) with the only real disappointment of the day, a tartare of ricciola (variously translated as amberjack or yellow tail – we struggle greatly translating Italian fish words to English, as we really are not that familiar with the English words to begin with). The ricciola was served with a dollop of oyster gelato, a concept that sounds more interesting than it is in reality. We honestly preferred the more subtle, thinly sliced crudo of the Fronte del Porto and la Perla and could have skipped the milky, briny, gelato.

Now about an hour into our meal, with the breeze picking up and the Lis having its desired effect we were served what turned out to be the highlight of the meal, a ravioli filled with fresh fish, served in an unlikely sauce of asparagus and pancetta and garnished with slivers of asparagus. We’ve been schooled in not combining sea and land food (no cheese on that seafood pasta, please), but this combination was simply magical, worth the price of admission.

Our main course was not so much a let down as it was superfluous. By the time our whole spigola or sea bass baked in a salt crust arrived, we were ready to head back to the hotel and bask in the glow of our ravioli and take a nap. Baking a fish or any meat in a salt crust, however, is a technique that you simply must try. The fresh bass, baked in its salty sarcophagus, came out incredibly moist and flavorful, asking to be drenched in the light extravirgin olive oil from Lake Garda that adorned the table. We probably should have brought back to our hotel the uneaten portion, but our mini fridge had other plans, which we’ll tell you about later.

There are so many excellent restaurants to choose from in Fiumicino, ranging from the simple to the memorable.  Along with Pascucci al Porticciolo (Viale Traiano 85, Fiumicino, tel. 06 6502 9204), Bastianelli al Molo defines memorable. So next time you are at Fiumicino take a detour and enjoy a treasure that is hidden right under your nose.

Bastianelli al Molo is located at Via della Torre Clementina, 312 in Fiumicino.  The telephone number is  06 650 5378 or you can email them at info.almolo@gmail.com. They speak English.  Do it for yourself.

A ten minute cab ride from Rome's Leonardo da Vinci Airport is the seaside town of Fiumicino, for which the airport is ...