Tuesday, the fourth day of our Cucinapalooza cook’s tour, saw our gang of six beginning to bring the various elements of what they have been learning to the task of preparing a full meal.  From beginning to end.  From shopping to menu design to preparation, execution and service.  From plating to wine pairing to entertaining.  And what better coach could we have for this soup to nuts experience than our good friend Simone, with whom we spent the better part of the day.

The day’s activity was designed with American sensibilities in mind.  Make it a competition and you will bring out the best, and possibly worst in people.  But no doubt about it, when winning and losing is on the line people will not sit on the fence.  And so we divided into two teams of three to undertake a series of activities.  First the shopping exercise.  Then the menu design.  And finally the cooking and execution. 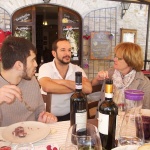 We departed the villa for the short drive to Bevagna aound 11am, where we met with our coach for the day, Simone Proietti-Pesci, chef-owner of one of our favorite nearby restraunts, le Delizie del Borgo.  Simone is well known to many of our customers and friends in the Washington, DC area, having travelled to our nation’s capital for the past three years to organize a series of private dinners in Washington-area homes.  He was also well known to all six of the Cucinapaloozers. 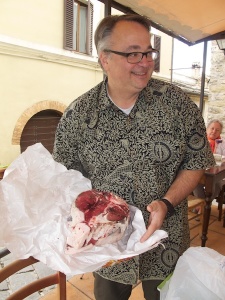 Upon our arrival at le Delizie del Borgo Simone presented each team with a list of ingredients to go shopping for in Bevagna.  The list included specific items, such as artichokes and asparagus as well as more general items such as a meat for the dinner’s main course.  The idea behind this treasure hunt was to require the participants to do some comparison shopping, to ask questions (as best they could with limited language skills) of the proprietors about the use of particular ingredients and how to identify the best quality and how to gauge quantities for cooking.  Unbeknownst to the participants, Simone had telephoned a number of shops beforehand to warn them of the American invasion and to ask them for their patience and help.

For an hour or so our groups wandered the streets of this Roman-Medieval borgo, one of the most beautiful towns in the region and one of our favorites.  And after having checked everything off their lists (and engaging in a little scarf shopping at the Claudio Cutulli store in Piazza Silvestri) they returned to le Delizie del Borgo for feedback from Simone and, more importantly, for lunch. 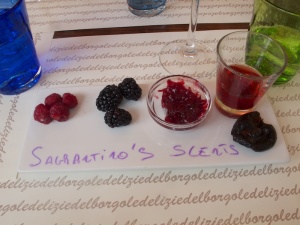 And after being congratulated for a job well done, Simone’s partner Ombretta began the customary assault of the plates, filling our table and our stomachs with an assortment of dishes tied together by their use of the local Sagrantino wine as a primary ingredient.  But even before the plates began to arrive Ombretta – a certified master sommelier – brought forth a small plate with a few dollops of individual flavors and an inscription scrawled on the plate that announced “the scents of Sagrantino.” 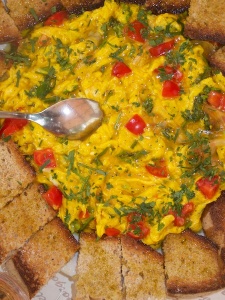 The idea behind the plate was to help us identify the scents and flavors found in Sagrantino wine, the most important red wine in Umbria.  This highly tannic, fruity elixir with hints of spice has put Umbria and particularly the Montefalco area on the international wine map and as a result the locals have increasingly adopted it and made Sagrantino a focus of their food, wine and promotion.  Ombretta’s masterstroke of putting together on one plate the various components one finds in Sagrantino – raspberry, blackberry, cherry, rose, honey and spice – allowed us to smell and taste the various Sagrantinos we were drinking and then to isolate the individual scents and flavors locked inside them.  It was the simplest, most straightforward and yet the most easily accessible and memorable method of improving one’s sensory abilities that we have ever come across.  And it was fun!

Another bit of fun Ombretta introduced us to was the opening of a bottle of sparkling wine (in this case a brut rose made from 100% Sagrantino by our good friends at the Scacciadiavoli winery) with a schiabbola, a handled, curved sword used by sommeliers to open champagne with a flourish.  Bending to our request, Ombretta agreed to demonstrate the technique but after failing after a couple of tries she offered me the opportunity.  And with incredible beginner’s luck I was able to break the top off the bottle on my first try.  It was, I must say, a great feeling.  I think I could get very used to doing this if I could only get my hands on a good schiabbola.  Check out my handiwork in the featured video. 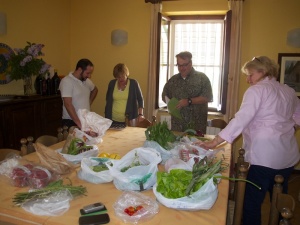 After lunch we returned to the villa and began reviewing our purchases and menu planning with Simone.  And the two teams then began to draw up a fabulous dinner plan, each team being charged with preparing an antipasto, pasta and secondo.  Simone gave each of the teams help planning the menu and worked with them in the kitchen to prepare the dishes, passing on his experience in making pasta, marinating vegetables, doing all the other magic he achieves in his restaurant on a daily basis.  The results of his teaching and our learning can be seen in the featured video.  It was, if I do say, a very worthy meal. 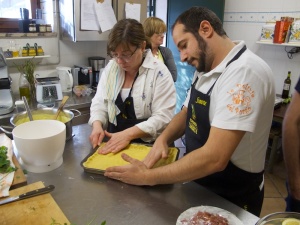 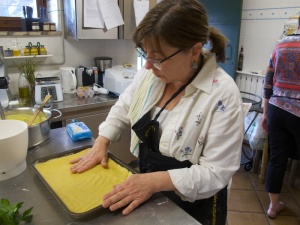 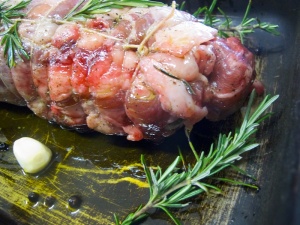 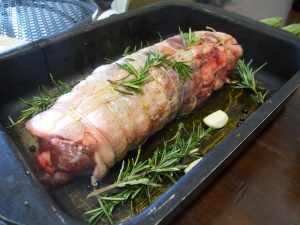 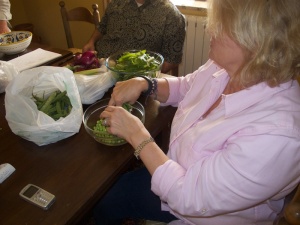 But don’t just take my word for it.  As our distinguished guests that night we hosted a number of members of the Pardi family, a local family from Montefalco with whom we have become close friends.  And what excellent friends to have, for in addition to be among the most genuine and friendly people we have ever had the pleasure of meeting, they are a family of winemakers and textile designers, a family that surrounds itself daily with beauty and devotes itself to adding to the beauty and pleasure that world has to offer.  And so we spent a lovely evening with our guests – Alberto, Agostino, Gianluca and the inimitable Augusta – enjoying the artistry and beauty that was found in our dishes, in the Pardi wine that was served and in the souls of those gathered around the table.  For at the end of the day, even if our teams were motivated by a sense of friendly competition to spur them to achieve wonders in the kitchen, it was the spirit of friendship and communion around the table where we all found true pleasure.

Check out the day’s Featured Video:

Tuesday, the fourth day of our Cucinapalooza cook’s tour, saw our gang of six beginning to bring the various elements of what ...