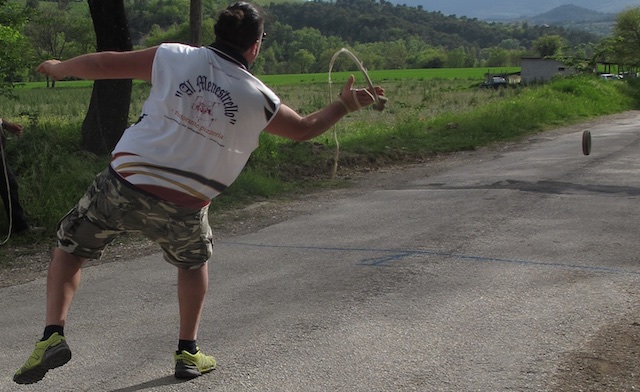 I have been vaguely aware of the existence of an Italian game from the countryside called ruzzolone for some time. I don’t know where I first heard of it, but I wish I had heard about it sooner. 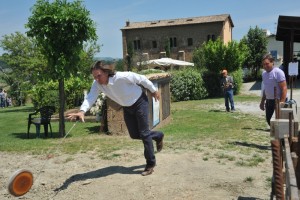 Lucky me!  About a year or so ago, while doing a google search on a particular winemaker we wanted to learn more about I came across his image in front of his winery. In the picture Giovanni Dubini was launching a huge wheel of cheese down a dirt path. With a few admirers cheering him on. This was Giovanni playing ruzzolone. The image of this sophisticated winemaker joyously playing farmers’ game captured my imagination and made me want to learn more about the game.

For the past year or so I have been joking with Albertino Pardi that I wanted to learn all about ruzzolone and transport the sport to America. Albertino, whose family owns and operates the Cantina Fratelli Pardi winery and who is a friend and colleague of Giovanni started my ruzzolone education on the spot, teaching me all that he knew about the sport, an ancient game that by some accounts traces its roots back to Umbria’s Etruscan forebears. Despite its origins, though, it is a game that was made for the country, for rustic folks, for Umbria. 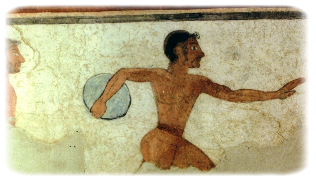 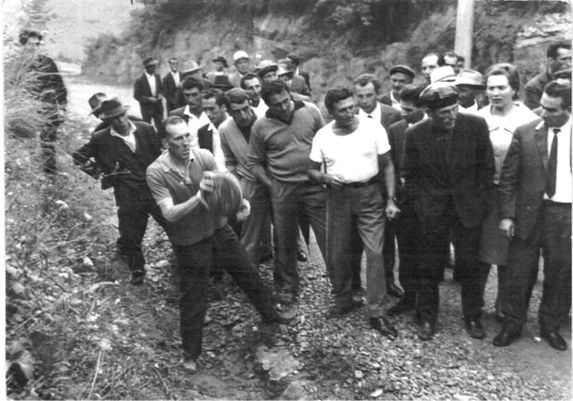 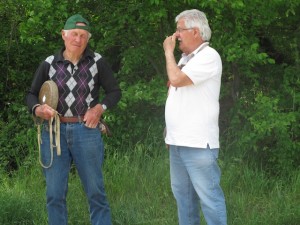 Ruzzolone is the answer to the question, “how can I entertain myself if all I have is a wheel of cheese, a belt and a country road.” The sort of question that no doubt comes up often in rural Umbria. Today’s modern game has substituted a standardized wooden disk for a wheel of cheese (which no doubt was too valuable to waste on sport), but still uses just a cloth strap and a country road. Players wind the cord around the disk and rock back and forth several times in a stylized, ritualistic windup before heaving ho in a motion not unlike a professional bowler, but putting all manner of English on the delivery of their disk to enable it to curve around corners, hug the edge of the road and, as is the object of the game, travel the farthest distance possible. And how it does travel! On a good throw for hundreds of yards, wending its way around curves, ricocheting off of hillsides, rolling ever forward for upwards of 20 to 30 seconds.

There seems to be no dress code for participants, save dark clothing and caps. Shaving seems to be optional as well. Grunting, so loud and baying that it would put Maria Sharapova to shame is looked upon favorably as is the occasional uncontrolled spewing of obscenities and invective as the disk deviates from its flight plan and launches itself into a nearby field or up a bank into a thicket of trees. 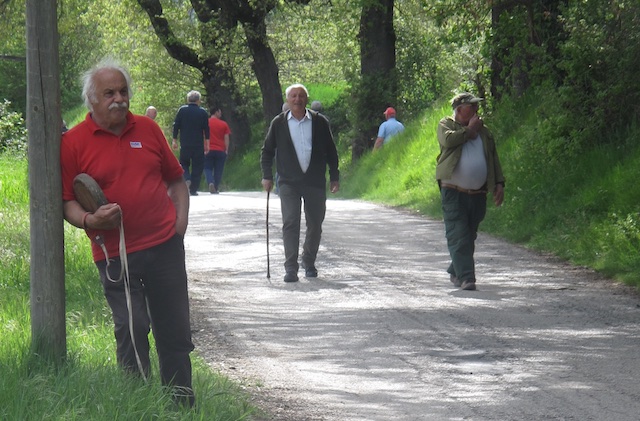 But what a way to pass an afternoon. Especially on a beautiful spring afternoon as Albertino, his wife Jessica, his brother Gianluca and father Alberto and I did recently along a quiet country road outside the ancient borgo of Castel Ritaldi. Grunting aside, the only sound was the occasional disk clacking along the rough asphalt, eventually coming to a halt with a bang when colliding with the makeshift barriers erected along the course or with a wobble as it lost momentum and simply rolled over. If the sport of golf is sometimes described as “a good walk spoiled,” ruzzolone is a good walk made even better. 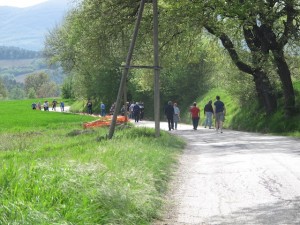 No wonder country farmers live to be 100. They drink lots of red wine, eat pork fat and walk along country roads with their friends, playing a game that Seinfeld could have invented. After watching (and even trying my own hand at it) I am convinced my instincts were right a year ago when I vowed to Albertino that I was going to bring ruzzolone to America. Ruzzolone may be just what we need.

Italian game played with a wheel of Cheese Read more

I have been vaguely aware of the existence of an Italian game from the countryside called ruzzolone for some time. I don’t ...