In my first blog post, I mentioned an aged country ham from southern Virginia. I was referring to the sublime Surryano Ham by Edwards Virginia Smokehouse. The name is a pun on the Serrano hams of Spain and the smokehouse’s location in Surry, Virginia, only a stone’s throw from the origin of the famed (and now mass-produced) Smithfield Hams.

This hickory-smoked ham is designed to be sliced thin and eaten raw like prosciutto or jamón. But the Surryano is even smokier even than the Südtiroler Speck (Speck Alto Adige) that we carry regularly. Despite the reputation that American cured meats are inferior to their European counterparts, chefs across the nation agree that this ham rivals any other prosciutto. Furthermore, Edwards Virginia Smokehouse embodies what we so value about Italian cuisine: attention to locality and quality. Edwards uses locally raised heritage breed hogs, as Italians have done for centuries, to create products that Americans have been making for centuries.

Now comes the sad part: in mid-January, Edwards Virginia Smokehouse burned down, losing all of its inventory. The Surryano Ham, which must be aged for two years, will not return for a while.

Here at Via Umbria, I originally wanted to carry an American ham as a point of comparison to our Italian prosciutto crudos. I began digging thorugh laods of ham literature, so looking for a ham that could live up to Surryano’s legacy. I found a few promising producers and reached out for samples. The first, Colonel Bill Newsom’s Aged Kentucky Country Hams, responded the same day with a personal call from the owner, Nancy Newsom Mahaffey. The Newsom family has been making country hams commercially for several generations, and the family tradition goes even further back.

I decided on two hams, both of which are now in our case at Via Umbria. The BBQ Ham is a cooked ham which Nancy calls a “Preacher Ham,” because you only want the best for the preacher on Sundays! It’s a smoky deli ham that’s great solo and would send you to the moon in a sandwich. We also stocked up on prosciutto. This is a dry cured country ham, cold-smoked, and aged breathing the open air of Kentucky! Its not quite as in-your-face smoky as the Surryano, but still amazing. We’re talking a complex balance of sweet and salty, of smoky and porky. It’s a testament to what American curing traditions can achieve—and I’m not the only one who thinks so. The “Preacher Ham” is the first (and only) American ham on display in Spain’s Museo del Jamón. Nancy was the first American and the first woman to be invited to the World Congress of Dry Cured Hams. This “prosciutto” is really something to behold, and I’m really excited to work directly with a producer with such high attention to tradition and quality. 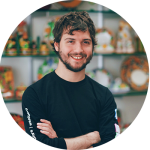 In my first blog post, I mentioned an aged country ham from southern Virginia. I was referring to the sublime Surryano Ham ...

scott
Scott Daniel Weiss, the butcher at Via Umbria, is a Northern Virginia native who, a few years ago, realized he. See more post by this author