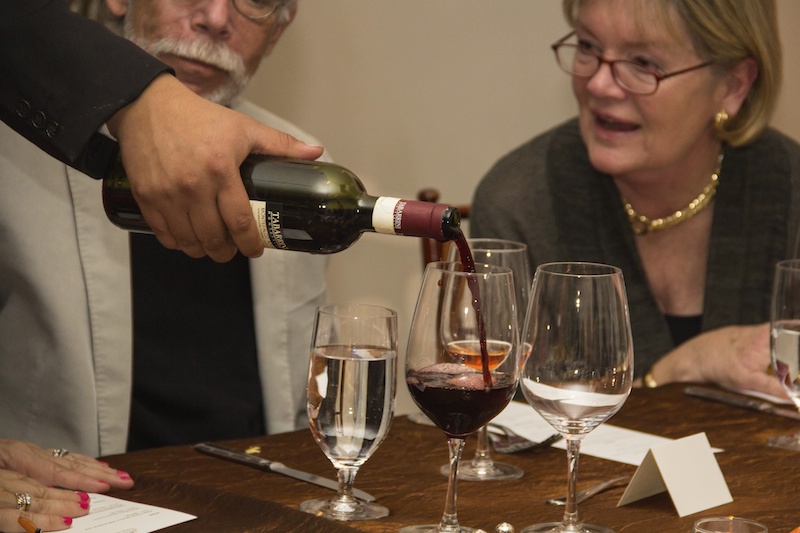 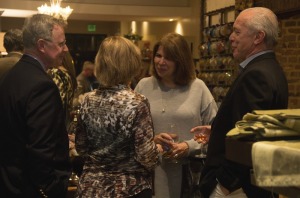 Friday evening marked the inaugural event in our upstairs event space at Via Umbria, a special winemaker dinner with Giampaolo Tabarrini, owner of the Tabarrini winery in Montefalco. Perhaps it was just a case of beginner’s luck, but the evening was magical.

Twenty something wine enthusiasts gathered in our ground floor retail space at 1525 Wisconsin Avenue at 7:30pm for cocktails and an opportunity to mingle and chat with the evening’s special guest. Prosecco (not Giampaolo’s) flowed and hors d’oeuvres were passed as the upstairs room was finalized and readied for the dinner by Corcoran Caterers, who would be providing the meal. 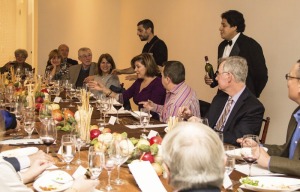 When the hour arrived the group headed upstairs to find the dining area dazzlingly set out with a long banquet table and lots of wine glasses. As the guests were seated Giampaolo was formally introduced to the group. A fourth generation winemaker, Giampaolo Tabarrini has brought the family’s estate international acclaim (Giampaolo was featured in this month’s Wine Spectator), as well as helping to put Montefalco and its most important wine – Sagrantino – on the map. 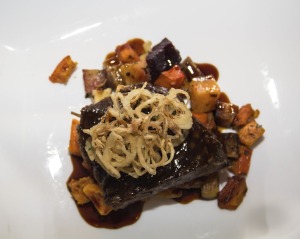 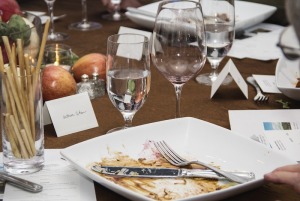 The evening’s featured wine, Giampaolo’s DOCG Sagrantino Colle Grimaldesco is part iron fist, part velvet glove. Garnering 95 points from Robert Parker it has won Gambero Rosso’s coveted Tre Bicchiere award for more than one vintage. Giampaolo led the group through a tasting of the Sagrantino as well as his unusual 100% sagrantino rose’ – Bocca di Rosa – and his justly popular Montefalco Rosso which is a blend of sangiovese, sagrantino and barbera grapes, the latter of which he argues is indigenous to Umbria, rather than it’s adopted home of the Piemonte. Each wine was matched with delectable course.

The treat of the evening was the raffle. For every case of Colle Grimaldesco purchased the buyer received an entry in the evening’s raffle to win an all expense paid Via Umbria wine tour in Umbria from March 26 to April 1 next year. Calling our tour Vinopalooza, the seven day, six night itinerary includes visits to 9 wineries, dinners and lunches with Montefalco winemakers (including a visit to Tabarrini winery and dinner with Giampaolo) and local sommeliers, visits to Montefalco and Bevagna and a special cooking class with a local chef. Needless to say there was a great deal of activity and at the end of the night our new friend Sue was chosen the lucky winner, to join at least three other winners at future Tabarrini wine dinners this December.

This amazing evening, which ended with a number of guests enjoying a cigar and a nightcap of Colle Grimaldesco in the second floor courtyard was anything but the result of beginner’s luck. With a great deal of planning and hard work we established proof of concept that Via Umbria’s second floor, which will be renovated and built out after the new year to include a demo kitchen, is a great space to hold special events.

And for those who were unable to join us last Friday, mark your calendars for December 4, 5 and 6 when we will be hosting three more Tabarrini wine dinners with special guest Daniele Sassi, Tabarrini’s head of sales and marketing. Or better yet, why not head to EventBright and get your ticket for one of the dinners while there are still spaces available. And in the meantime, visit our sister site – Experience Umbria Wines and buy a bottle of the Colle Grimaldesco today!

What a lovely dinner Read more

The treat of the evening was the raffle. For every case of Colle Grimaldesco purchased the buyer received an entry in the ...