You guys. I have a serious relationship with British cheeses. This will come as no shock to those of you who have either read my blog posts or visited my counter – I’ve made my love known far and wide. Growing up with an English mother whose parents had a farm in the Yorkshire Dales, it doesn’t take a rocket scientist to figure out where the roots of this relationship formed. Couple that with Via Umbria’s partnership with famed British cheese shop/affineur/exporter, Neal’s Yard Dairy – a partnership that has given me and my lovely customers access to the best that Britain has to offer – and my love of these curds from the UK has damn near become an obsession.

A very large portion of this love is dedicated to the one cheese that opened my eyes to the wonders of blue mold – Stilton. Creamy yet crumbly, powerful yet approachable, good on its own or incorporated into recipes, this beautiful blue cheese was my gateway blue. And no time of year makes me crave it more than holiday time.

Growing up, my family and I would celebrate Christmas with my English grandparents. My sisters and I looked forward to it for months – an hours-long feast that included caviar canapes, duck à l’orange or roasted pheasant, my granny’s famous roasted potatoes, and Christmas pudding served with copious amounts of rum butter. The meal was so lengthy and full of so many delicious things, that we’d have to play games between courses in order to make room for the next culinary delight. As with many a British Christmas, however, no Christmas meal was complete without a very large hunk of Stilton served with port. It was heaven. 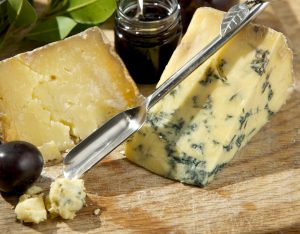 So what is Stilton? Named for the town of Stilton, this quintessentially British cheese can trace its roots all the way back to the 18th century, although research shows that it was a very different product then than it is now. The first descriptions of Stilton cheese describe it as more of a cream cheese with no blue veining whatsoever. Over time, however, it evolved into the classic blue beauty that we know and love today.

Now a protected food, there are restrictions on cheeses that bear the Stilton name – it must be produced in one of three counties (either Derbyshire, Nottinghamshire, or Leicestershire), be made with local pasteurized milk, have a naturally rinded cylindrical shape, not be pressed, and of course, have blue veins. Even if a wheel meets all of these requirements, however, it still may not make the cut. Every wheel must be graded and pass a quality test before being dubbed “Stilton”. If a wheel doesn’t pass muster, it must be sold simply as “blue cheese”.

Even though about a million wheels of Stilton are made every year, there are only six dairies that are licensed to make this classic blue. At Via Umbria, our Stiltons are made by Colston Bassett Dairy in Nottinghamshire, and hand selected by our friends at Neal’s Yard Dairy. Founded in 1913, Colston Bassett has been making Stilton for over 100 years, and has only had 4 different cheesemakers during that period. As Jason Hinds, Sales Director at Neal’s Yard Dairy, puts it, “With only four cheesemakers in the last one hundred years, Colston Bassett has maintained a tradition and quality of cheesemaking that is unparalleled in the Stilton world. It is the only Stilton that Neal’s Yard Dairy has carried for the last thirty three years.” And if it’s good enough for Jason Hinds, you better believe that you have a seriously good cheese on your hands.

All of this to say: Colston Bassett Stilton is Via Umbria’s December cheese of the month! Come and join us next Wednesday at 7:30pm for our December Cheese Party, and jump into the holiday season by tasting this fantastic piece of British tradition.

You guys. I have a serious relationship with British cheeses. This will come as no shock to those of you who have ...

alice
Alice Bergen Phillips, the cheesemonger at Via Umbria, originally hails from Chicago, IL. Alice grew up in a family who. See more post by this author