I’ve always loved smoked salmon. Growing up, on special occasions there was always a little “bagel and lox” to be had for breakfast. The simple balance of saltiness and fishiness was something that I was always surprised that I enjoyed – I was never much for fish. That being said, I had no idea what I was eating really. Then one day, while living in Scotland, I grabbed some breakfast to eat on the train to London: a bagel with smoked salmon. Surprised at the low cost of such a brekkie, I was happy to pretend it was a special occasion – I was on my way to London, after all. 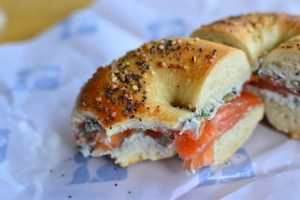 Then I got on the train, got settled and took a bite: this was not lox. Or, at least, this was completely different than anything I had eaten before. The intense smokiness added a whole layer to the salt/fish balance that I was used to and it was amazing. For the rest of my time there I was eating this salmon up. It was something that I dearly missed when I returned stateside. Until recently, when I happened upon some salmon smoked by a company called the Ivy City Smokehouse.

Right here in Washington, DC, in a neighborhood with an historic legacy of food production (and a modern reputation for artisanal liquor production) they were making smoked salmon as good if not better than what I was buying in a Scottish train station. So naturally, with our focus on sourcing local, I wanted to get them in our store. I reached out and was immediately impressed with their company and philosophy. Great care is taken into the sourcing of the fish, with entirely sustainable trout and as close as possible to sustainable salmon being used. Indeed, the detail with which Nate, from the Smokehouse, spoke about the sourcing and sustainability was remarkable. 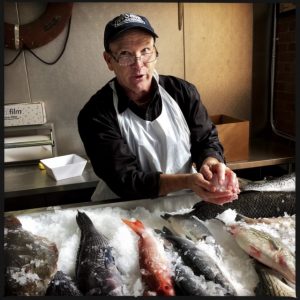 I soon realized that they had a whole range of all-natural products: a salmon candy in the style of the Pacific Northwest, a gravlax (Scandinavian, but oh so like the Jewish lox of my nostalgia), the best “pastrami-style” salmon I’ve ever tried, and even a hot smoked trout that is to die for. The commitment to quality stands throughout the product line and I know that you will enjoy this fish as much as I do.

I’ve always loved smoked salmon. Growing up, on special occasions there was always a little “bagel and lox” to be had for ...

scott
Scott Daniel Weiss, the butcher at Via Umbria, is a Northern Virginia native who, a few years ago, realized he. See more post by this author