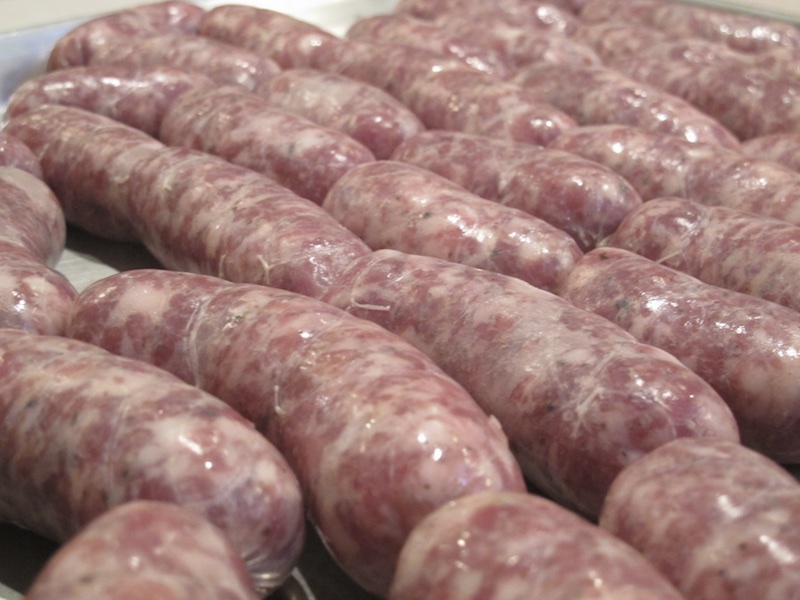 Laws are like sausages.  It is best not to see them being made.
— Otto von Bismarck

It is January, the beginning of the New Year, when thoughts turn to resolutions, diets and exercise.  It is also the time of year, for the past five years, that we welcome back chef Simone Proietti-Pesci for his annual US visit.  Yesterday marked the beginning of his return, a three week tour and tour de force that begins in the Napa Valley of California and will take him (and us) to Washington, DC, New York, South Florida, Boston and the Cayman Islands.  We’ll chronicle Chef Simone’s daily activities here on Dolce Vita for those of you who cannot get together with him in person. 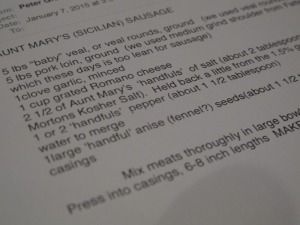 Our first activity, just hours after connecting with Simone at SFO (he having flown from Rome, we having taking the shorter trip from Washington) was to set up camp at our friend Pete’s in Napa Valley where Simone (and his able assistant Austin) will prepare an Umbrian dinner party this evening.  With nothing formal on the day’s schedule (other than dinner at Bouchon) Pete suggested that we organize a sausage fest, relying on our expert Umbrian sausage maker to help make Umbrian sausage and Pete’s family recipe from his Sicilian aunt.

Pete had prepared in advance, laying on provisions, including ground pork (for the Umbrian variety) and ground pork and veal (for the Sicilian).  He also trotted out his new toy, a LEM sausage packer that looks like a cross between Pinocchio and the Tin Woodsman.  This gadget would make Chancellor Bismarck particularly happy, packing the sausage filling seamlessly and without mess into the casings that are loaded onto the spindle.  Having watched Julietta, our local butcher in Cannara hand pack sausages at a cooking class earlier in the year, we even more appreciated the crank it and forget approach afforded by the LEM.

Much weighing of ingredients and calculations of salt percentages were made by Pete and Simone and the ingredients mixed and massaged by hand.  Help was enlisted from Pete’s parents and the rest of our assembled group and then magically, from a mass of ground meat and simple spices emerged from the LEM not Neil Armstrong, but an unending array of dirigible shaped delicousness.

While many of the links will be consumed at Simone’s Saturday Umbrian open house in San Francisco, we did sample enough, including a generous portion added to a pizza Pete threw together, to attest that home made sausage beats store-bought any day of the week.

Including (if not especially) Wednesday, the day we started Simone’s three week US adventure.

Behind the Scenes of Sausage Making Read more

Laws are like sausages.  It is best not to see them being made. -- Otto von Bismarck With all due respect to the Iron ...