I would describe our hotel in Fiumicino, the Hotel Tiber, as “perfectly adequate.” The staff was nice and accommodating, the rooms quite spacious and modern. The air-conditioning and wifi worked well, a particularly important feature (at least with respect to the former) given the hellish heat the country is currently experiencing. I really can’t think of anything in particular to complain about about the Tiber. Except, perhaps that their rooftop pool which had no umbrellas, rendering any poolside lounging either impossible or an exercise in how to get melanoma in one easy step. But come on, complaining about a rooftop pool in Italy? First world problems.

The hotel is well located just across the canal where the village’s fishing fleet ties up. In the morning the boats rig their nets and head out to sea. In the afternoon they return and set up an ad hoc seafood market, where local restaurant owners shop for fresh fish and good deals. 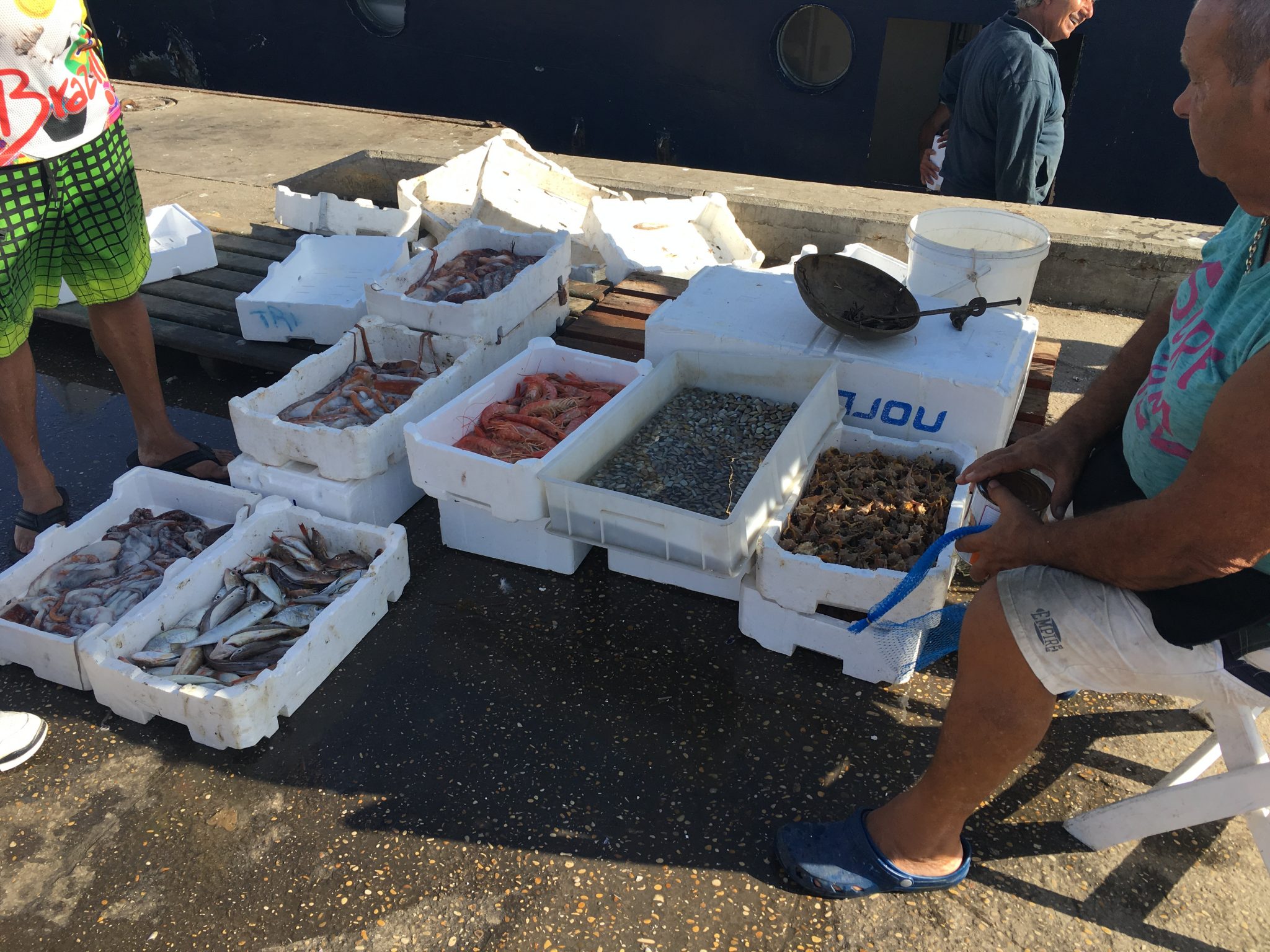 With our two day sojourn coming to an end, we decided to pay a visit to the market with an eye to bring some fresh catch with us to Umbria the following day. The timing was perfect as we came stumbling up the quay from our four hour seafood extravaganza lunch at Bastianelli al Molo. Much of the fleet had just returned for the day and each boat was displaying their catch on ice in styrofoam boxes lined up along the pier.

Now seeing the selection, we were determined to make a purchase, but where to store our treasures overnight? I ran across the street to our hotel and asked the front desk if we could store a flat of seafood overnight in the hotel restaurant’s refrigerator, to take with us when we checked out the following day. The reception promised to get an answer and phone me back. So back out to the market I went, optimistic that the answer would be yes.

After speaking with one of the captains and learning that the price of a flat was only €5, I went ahead and consummated the deal. The following night, I imagined, Suzy and I were going to enjoy a heaping platter of fritto di paranza, or mixed fried fishes, which are not normally found in Umbria, Italy’s only landlocked, coast-less region. 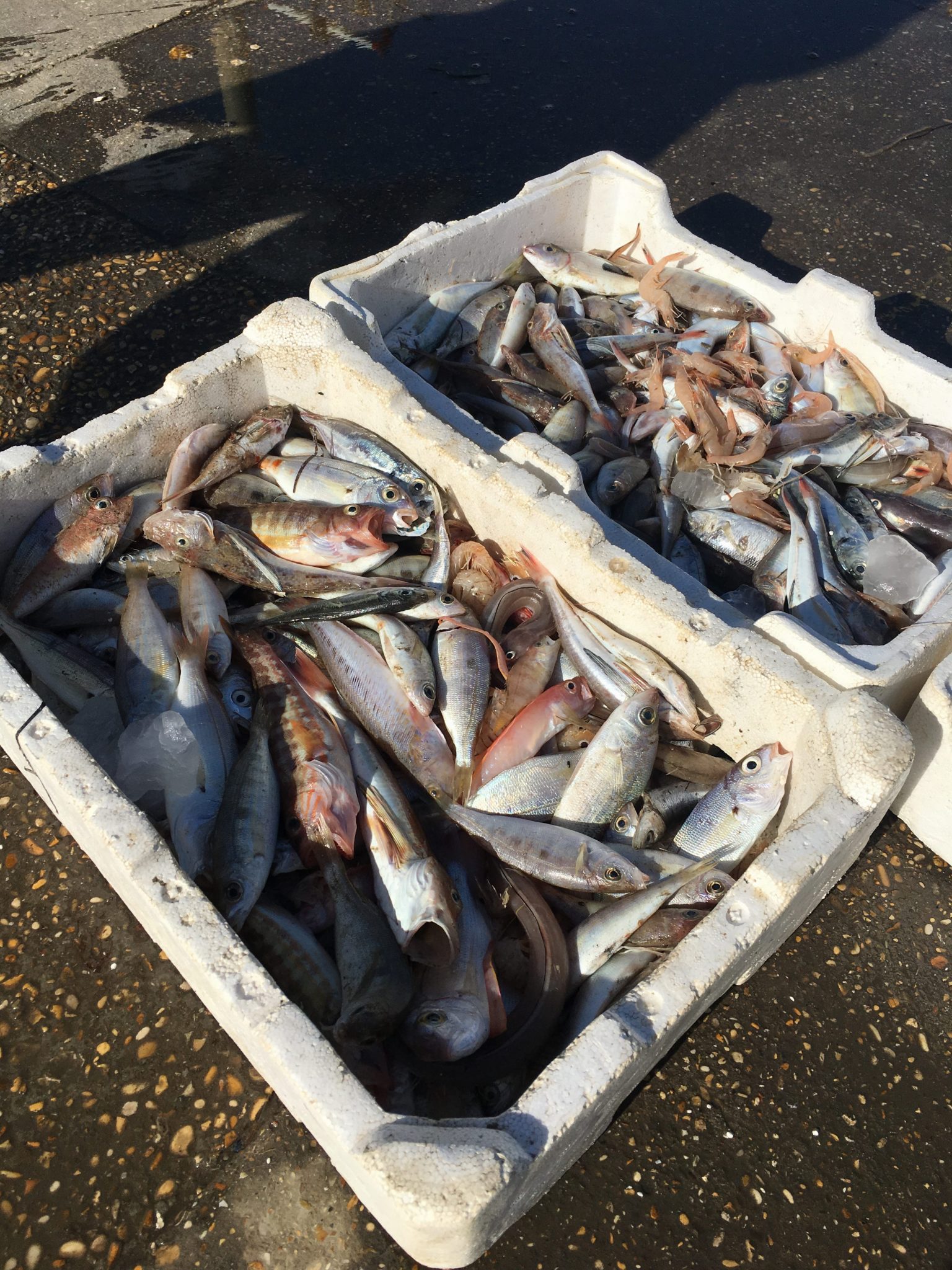 Just moments after the transaction was finalized and the dozens of tiny fish put into a bag with ice, my phone rang.Buona sera, signor. Unfortunately the kitchen cannot accept . . .

Not to worry, we thought. This very nice, modern hotel has a mini fridge with lots of space. So we headed back into the hotel, bag of fish hidden from view of the front desk and headed up to our room. There we discovered that the mini fridge did indeed have plenty of space for our bag of swag. Our plan was proceeding perfectly.

The next morning we arose without incident and headed to the Tiber’s breakfast room, a light filled room on the top floor of the hotel with views of Fiumicino town, the beaches and the sea. We enjoyed a very nice breakfast before heading downstairs to our room where we planned to pack up, pick up our rental car and arrange to spend the day at one of Fiumicino’s beaches before driving up to Umbria.

When the elevator stopped on our floor, even before the door fully opened, we were hit by it. The powerful stench of rotting fish that was clearly emanating from our room, located just across from the elevator. When we opened the door to our room one glance and one sniff confirmed our suspicions. The fresh catch from the afternoon before had turned fetid in a mini fridge designed to keep small cans of Coca Cola tepid, rather than for preserving in fresh condition the fruits of the sea. A sickening slick of goo trailed under the refrigerator door and onto the floor. And a powerful smell filled the entire room when I opened the small glass door of the mini fridge. Apparently overnight the fish gradually went bad, the odor slowly accumulating so that we slept through it and our senses acclimated to it. Fortunately our breakfast break allowed us to escape the room for a half hour, enabling our olfactory machinery to reset, or we may have never been aware of what everyone else who used the third floor elevator must have been thinking. Where is that smell coming from?

Our first order of business – or oder of business – was to remove the source of rankness and to do what we could to eradicate the smell. Thoughts ran through my mind of nicotine addicted guests being charged €250 for smoking in their rooms. What would the Tiber charge us if we didn’t fix this problem pronto?

I quickly found every plastic bag and trash can liner I could assemble and dumped our former treasure into this container, hoping against hope that I would not leak a trail of liquified fish from our room through the lobby and to its final resting place. Fortunately, the bags held and I was able to make a dash through the lobby without arousing too much suspicion. I was on the street. Now where to dispose of Nemo and company?

Typically Italian towns have plenty of public trash cans but the ones close to the hotel  were all jammed full of refuse and I wasn’t about to leave a bag of rotting fish on the ground. There were plenty of privately owned bins but too many witnesses. So after about ten minutes, spying a cluster of cans that looked promising I veered off the main street into a residential neighborhood. I made one pass past the bins, aborting my attempt as a neighbor eyed me suspiciously. But after she went back inside her apartment I made an about face and, pulling the offending package from our plastic tote bag was able to subtly open and deposit it in the can, not even breaking stride as I did so. A whiff of the tote bag turned up no noxious residue, so it was back to the hotel for a final site cleanup. Things were looking up.

When I stepped off the elevator on the third floor I was again greeted by the strong odor of fish, even though we had started to air out the room a half hour earlier. I grabbed a couple of hand towels and started scrubbing and cleaning the slick of sickening fishiness that was still in the bottom of the mini fridge and after about 10 minutes it was all gone, the towels rinsed and soaking in the bath tub. A bit of fishiness lingered in the air, but nothing that late checkout during our visit to the beach wouldn’t take care of.

Later that day we returned to the Tiber after our trip to the beach. When we returned to the room to close up our suitcases and check out, only the tiniest wisp of fishiness remained. We visited the front desk to check out, receiving no lecture about storing fish in the mini fridge or finding an extra room cleaning charge. It appeared that we had survived Salt Watergate unscathed, although I’ll keep monitoring our American Express bill for additional charges in the future.

Talk about a fish story. And so, it’s onward to Umbria!

I would describe our hotel in Fiumicino, the Hotel Tiber, as "perfectly adequate." The staff was nice and accommodating, the rooms quite ...