Father’s Day reflections.  When you’re young, a dad can do no wrong. Somewhere along the way to adulthood, many people outgrow this feeling, finally realizing that all of the rules and decisions their parents make are just that—decisions, rules, and beliefs—rather than absolute truths. Luckily for me, my dad, Lorne, was a genuinely awesome person, and I carried that feeling of awe and admiration for him through my teens, into my 20’s and even when I hit 30. He was always my biggest supporter. He taught me from an early age that I could (and should) do anything. Unfortunately, my father passed away 17 years ago. His life ended all too soon, but it was a life lived large and one that I am very thankful to have been a part of.

While I have many reasons to be thankful for my father, one of his greatest gifts was to treat me and my siblings with respect and teach us to hold our own among in a group of adults or peers. Unlike many of my friends and relatives, we definitely were not raised to be seen and not heard (which, to be honest, for a family with as many children as ours was quite a feat). This lesson was especially important because the year I was born, my father became the youngest representative ever elected to the Iowa State Legislature – and so began our life in the spotlight. My father carried his philosophy of raising children beyond his personal life and into his professional life. Even as young children, we weren’t simply trotted out or put on display for special occasions—every day was a special occasion and the whole family was part of the team. 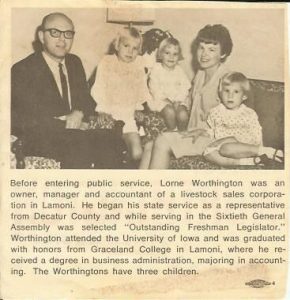 We were involved in his political career. From Representative to State Auditor to Insurance Commissioner, we knew from a young age that what we did and how we behaved reflected not just on us but on our family. While that added a certain responsibility, it was matched with the opportunity to travel around the state with Dad and to join him at dinners and receptions. Note to others: While it may seem like a great idea to sit through a two hour dinner eating nothing but black olives off of your fingers, at a certain point it will make you a very sick girl.

Now, Father’s Day is a day to share with my husband and kids.

I was nervous back in early 1985 when Bill and I visited my father and his wife in New Hampshire, and Lorne invited Bill into the dreaded library. I didn’t have time to warn Bill that all conversations with my family should take place in the kitchen. No good conversations had ever happened in the library – until the day my father took it upon himself to let Bill know that he approved of him as a future son-in-law. Not that Bill was asking.

Raising kids is no easy task and definitely can take its toll, but having twins as baby number three (and surprise baby number four) really put us to the test. I think we both had different impressions of what life would be like with a five year old, a three year old and two new babies: I stocked up on bathrobes and face cream, and Bill started saving stale bread to make croutons and had a new set of golf clubs delivered. Fortunately, both of us were way off the mark. Having twins gave us the freedom and ability to relax, knowing that we couldn’t keep everyone happy at once. And once we relaxed all of the kids were happier. It was a win-win. 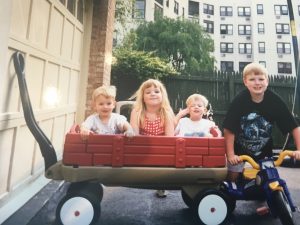 Watching Bill’s relationship with our kids has been a great joy. When the kids were little we would wake early every morning to have a quick family breakfast together before school–a guarantee that we would have at least one family meal every day given the hectic nature of our lives. Dinnertime was an opportunity to catch up on everyone’s day, and because of that, it could and often did stretch for hours. It was never a wise move for the kids to save homework because somehow, “I ran out of time because family dinner ran too long” wasn’t considered a valid excuse by any of their teachers.

One of the legacies that Bill’s dad passed on to him was a love for the Boston Red Sox and the Miami Dolphins. Two teams that struggle for victory—but when they win there is much celebration at the Menards. As a Florida native, Dolphins games were a rite of passage for Bill, and he made a point of passing along the tradition. With a season pass that allowed three tickets a game, he would alternate and take two of the kids to the home games at least once a year. A weekend without Mom’s watchful eye would include such forbidden treats as tailgating with Popeye’s fried chicken and throwing a football in the parking lot–with moving cars. It’s a miracle they all survived. 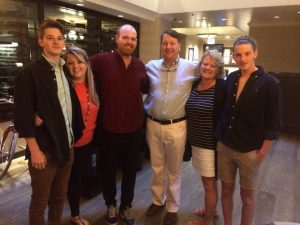 It strikes me as I write this how many memories of my family, both the one I was born into and the one I have raised, have centered around the kitchen, the dining room table, and food in general. What we were eating—from Moms’ pot roast to pizza delivery—never mattered as much as where we were eating it, always seated around the dinner table surrounded by family. For me, that is the tradition that I thank my Father for instilling in me and I thank my husband for indulging me in recreating: making time to spend together, to reflect on the day, to learn about each other’s lives, and to create shared experiences at the table. This is the aspect of our lives that we most want to bring to Via Umbria. Beyond the actual food we serve, beyond the wine we drink, beyond the beautiful ceramics used to serve these things, Via Umbria is a place where people can come together to create their own experiences of family. The greatest compliment we have ever received came one night after dinner in the Laboratorio demonstration kitchen, when a new customer told me, “This place is so comfortable, it feels like being home.” My favorite place to be has always been in the kitchen at the table, and I want to share that place with all of you.

This Father’s day, I will be celebrating with my husband of 30 years, father to our four children, my business partner, and the love of my life, and I am sending a big thank you to my own father Lorne for being such a big part of our life and for setting a high bar for how to be a great dad.

Father's Day reflections.  When you’re young, a dad can do no wrong. Somewhere along the way to adulthood, many people outgrow this ...