One of the challenges in blogging about our Umbria Food and Wine tours is to fight the temptation to chronicle and recount every single activity that we do each day.  First, the internet is not large enough to store all that we would write.  Second, no one would believe us.

So daily we modestly use a little artistic license to edit out and fit into a more believable human scale that where we go, those with whom we talk and laugh, and, especially that which we eat and drink.  The hardest job I have is making those editorial cuts.

Tuesday’s job was easy.  We visited Norcia, our favorite pork town and took a tour of the Patrizi Prosciuttificio.

Norcia, a town which we have visited a dozen times in the past is a picturesque walled town in the Valnerina, the Nera river valley that is on the other side of the mountains from Spoleto.  Separated from the Umbrian valley by the Apennines it is more than a world away.  The drive to Norcia is characterized by windy roads that follow the Nera river, carved deep below steep, rocky, plunging mountains.  But a few kilometers before reaching Norcia, after a half hour of zigs and zags, the steep mountains begin to open up and a fertile verdant valley begins to unfold.  It is a little Swiss-like, both in color and landscape, and here, since Roman times, farmers tended to their flocks, butchers sharpened their knives and their skills and people went about their business secure in the knowledge that they were about the best fed people in the world.  Best fed if you like pork. 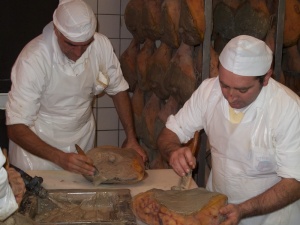 For the word Norcia – as I have written hundreds of times before – as well as the place called Norcia, is synonymous with pork.  For hundreds of years the people of Norcia have practiced the art of butchery, spreading their trade throughout Italy and the rest of Europe, giving meaning to a new word – norcino – which means both a person from Norcia and a pork butcher.  One word with two meanings because the two are one and the same.

So we come often to Norcia, especially during out Food and Wine Tours, to learn about pork and about butchery and to taste and compare.  It is a tough job but as they say, someone’s got to do it.  And so we set out on Tuesday morning for Norcia, this time to learn about the art of making prosciutto.  And our destination was the prosciuttificio – or prosciutto curing warehouse – of the famiglia Patrizi. 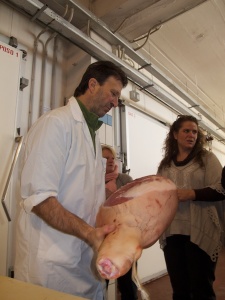 We arrived at Patrizi just after noon, having spent the first part of the morning learning about and tasting olio novello, the season’s “new” extravirgin olive oil (pardon the lack of editorial discipline in sticking to a single activity to describe).  The hourlong drive from the Trevi-Foligno area, through the rocky gorges that begin at Scheggino and continue all the way to Norcia, an all natural landscape bathed in bright sunshine, made one feel a communing with nature and helped one forget all the olive oil slurped and bruschettas stuffed down in the service of learning.  It is hard to make this drive without shifting your focus, becoming more attuned with nature and sloughing off the concerns of the modern world.  This is part of the magic of Norcia and the Valnerina. 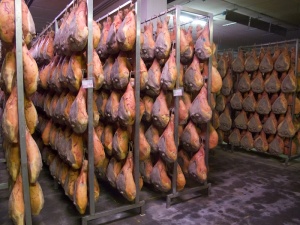 We passed Norcia itself and instead of winding up and over the mountain to Castelluccio, a lunar-like landscape in the adjoining valley where Italy’s best lentils are grown and another regular visit of ours, we continued straight toward the town of San Pellegrino to a small settlement called Frascaro, tucked away in the National Park of Mount Sibilla.  This valley, green and fertile and surrounded by towering mountains, possesses the perfect climate for curing the hind legs of pigs.  It has been a place for making prosciutto for centuries.  And today our hosts at Patrizi were going to show us the entire process.  And along the way we would get the opportunity to taste.

From the outside one would be hard pressed to guess that the nondescript concrete building that is the Patrizi prosciuttificio housed nearly 70,000 hind pork legs, drying and aging them in the clean, fresh, Norcia environment.  Indeed, right in front of the building Wendy stopped an oncoming car and asked for directions to Patrizi.  Easy, the driver responded.  Turn into through that fence and you’re there. 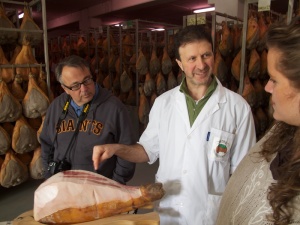 And so we did and a few moments later Davide, one of the brothers who manages the business that their father founded and which he has grown up working in, slid open the large doors and greeted us with a smile that we were to learn is perpetual and as much a part of the man as the sharp butcher’s knife that is strapped to his side.  Davide greeted everyone in our group warmly and welcomed us inside, into the sanctum sanctorum.  The secret black box where pig legs become prosciutto.

And over the course of the next hour we were let in on the secret of prosciutto.  In those rooms, where thousands upon thousands of legs make the mystical journey from animal flesh to treasure, a very simple process is at work.  Salt and Time, the Patrizi brochure states (yes, they gave us English brochures).  Salt and Time, the two “secret” ingredients in transforming a ham into a prosciutto.  No more, no less.  There is no special sauce, expensive ingredient, complicated process that cures a prosciutto.  It is the simplest, most natural process imaginable.  The long, slow drying of prosciutto in the clean air of the Valnerina, an environment, both meteorologically and culturally pure, where one can wait and let nature take its course over the year and a half that a leg of pork becomes a prosciutto.  What makes a prosciutto from Norcia special?  You really have to visit the area to feel it, to understand in your bones that literally nowhere else can nature do its work as well as it does here, in the shadow of Mount Sibilla. 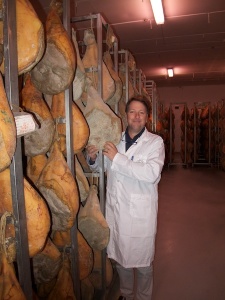 And to drive that point home, our lunch that day, after a late morning antipasto of bruschetta with olio novello back in Foligno, was simply prosciutto.  Set up on a makeshift serving table in the middle of one of the aging room floors, Davide and his wife and colleagues proudly displayed a fresh prosciutto for us, anchored in a traditional stand, the topmost layer already sheared off.  Below was a marbled prosciutto, with thick veins of creamy pork fat throughout, the style of prosciutto that Davide says keeps him eating prosciutto despite decades of surrounding himself with pigs legs.  And for the next hour he and I, with an occasional guest appearance from my friend Pete slice paper thin, translucent slices that are placed on a simple plastic plate and as quickly snatched up by our group, draped on a piece of neutral tasting bread and snarfed down.  It is amazing to see how much prosciutto a person can put down in this environment.  Perhaps our group was just being polite, trying to show Davide how good his prosciutto was.  But I suspect they ate nearly a half a leg because they could. 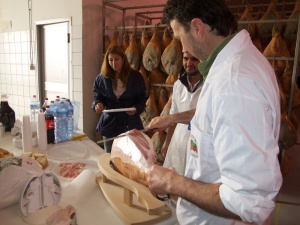 Salt and Time.  Gifts from nature that tend to get lost, to get pushed aside in our rush to move forward, to enrich ourselves so we can have more time.  Here just outside Norcia, unhurried, standing around a table with a single leg of prosciutto, surrounded by hundreds of legs that have been hanging here for months and will continue for many more months to do nothing but sit, biding their time as they “become” prosciuttos, we can 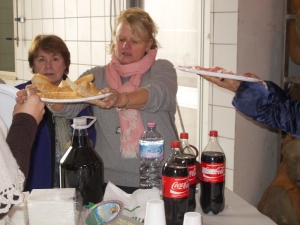 perhaps begin to appreciate how important those two simple, elemental ingredients are.

One of the challenges in blogging about our Umbria Food and Wine tours is to fight the temptation to chronicle and recount ...