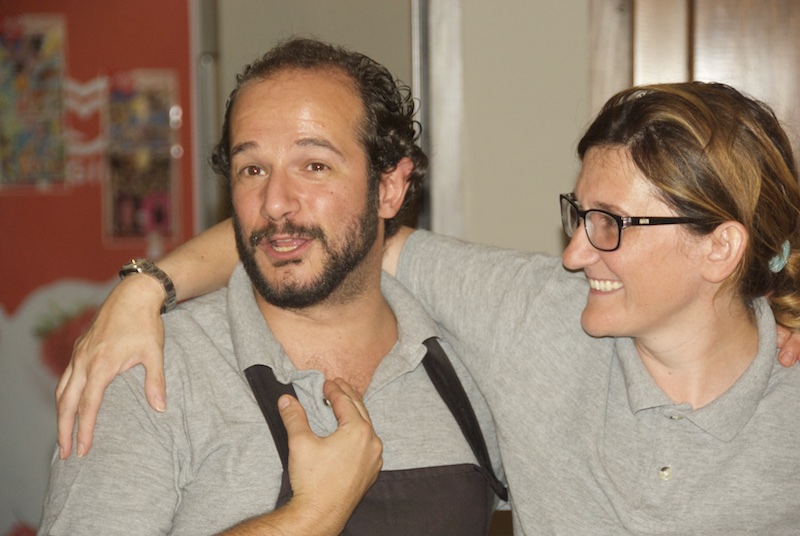 This was going to be the year Suzy and I did not make our annual summer visit to Italy. Instead of hot summer Cannara days and cool Umbria Jazz under starry skies, taking the place of rocky Ponza beaches and breezy Ischia sailboat trips we would remain in steamy, sultry Washington, our attention focused squarely on completing – or at least moving forward – the renovation and reopening of Via Umbria as an Italian market.

But life often has other plans for you. Plans that do not align perfectly with the gantt charts and timelines that get you from demolition to grand opening. And so this week life threw us a curveball that said “I want you to come to Italy.” A fat hanging curveball that we swatted all the way from Washington to Bevagna. Life told us that our friend Simone was going to have his own grand opening, the reopening of his restaurant le Delizie del Borgo and we decided, emphatically, that were not going to miss it.

So with progress at Via Umbria slightly stalled and the opportunity present to sneak away for a few days we scoured the online travel websites, landing a perhaps too-expensive but unassailably priceless pair of tickets that would take us from home to Bevagna for Friday’s grand opening. We were on. And no one knew we were coming.

Suzy and I have been boarding flights to Italy three or four times a year now for the past decade, and we always feel a sense of excitement about the possibilities that lie ahead. What new adventure will we discover? What new friends will we make? What unforgettable dish will we eat or bottle will we drink or fresco will we see? But boarding the non-stop flight to Rome, in fact getting into the car for the two hour drive to the airport was an experience so filled with excitement, made us so downright giddy, that you would think it was the first time we’d ever flown.

Upon our arrival in Rome we were met with cobalt blue skies and a blazing sun that our Italian friends have reminded us all summer long has scorched the Italian peninsula this year. But carefree we settled into our little rental Fiat 500, cranked up the air conditioner and hit the autostrada, making record time thanks to carry on luggage. After a brief stop in Todi to explore a little bit and enjoy lunch, by early afternoon we were in Bevagna, home of le Delizie and our home for the next four days. 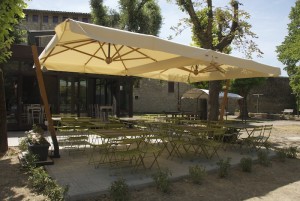 When seven o’clock rolled around (the hour the celebration was slated to begin) we got sidetracked on a call back home, finally emerging from our albergo about an hour late and hoping we hadn’t flown across the Atlantic only to miss the celebration. But as we exited Bevagna’s city gate and made our way up the path that leads to the Campo dei Frati public park that houses the new Delizie, the overflowing parking lot and the music gently wafting through the trees told us that a celebration was going on. 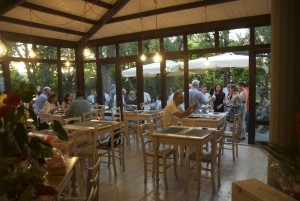 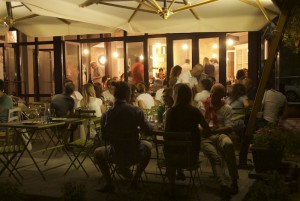 Our first glimpse of Simone and Ombretta’s new restaurant was one that will be hard to forget. When we departed Italy last November the pair had opened their restaurant in Bevagna’s public garden, taking over a humble kiosk that served ice cream to park dwellers and served as a simple snack bar for the locals. But that simple edifice included the bones for a kitchen and over the winter Simone and Ombretta planned and cajoled and tirelessly worked toward constructing a permanent outdoor structure to house their dream. That first glimpse confirmed what we already knew. Simone and Ombretta are excellent dreamers. And tonight their dream had become a reality.

Built around the old snack bar kiosk was a beautiful glass structure, a sort of winter garden lit from within by a soft golden glow that cast its warmth onto the outdoor patio seating which was itself covered by two enormous umbrellas. Under the umbrellas, crowded inside the pavilion and lounging on park benches a hundred well wishers were laughing and chatting, eating and drinking and sharing in the moment of triumph for their friends. Just as we had arrived to do.

About fifty feet from the restaurant entrance we were recognized and discovered by Simone’s partner Desiderio, whose eyes bulged Marty Feldman-like and who threw his hands to his face Macaulay Culkin-like. As we stepped into the dining room Ombretta spied her surprise visitors with a look of shock that immediately turned to tears. And a moment later, Simone working in the kitchen spotted us through the window, matching Ombretta tear for tear. Within seconds the entire group was engaged in a speechless hug, our anticipation finally being realized, their surprise just now being processed. It was indeed a magical moment that exceeded anything we had or could have imagined. 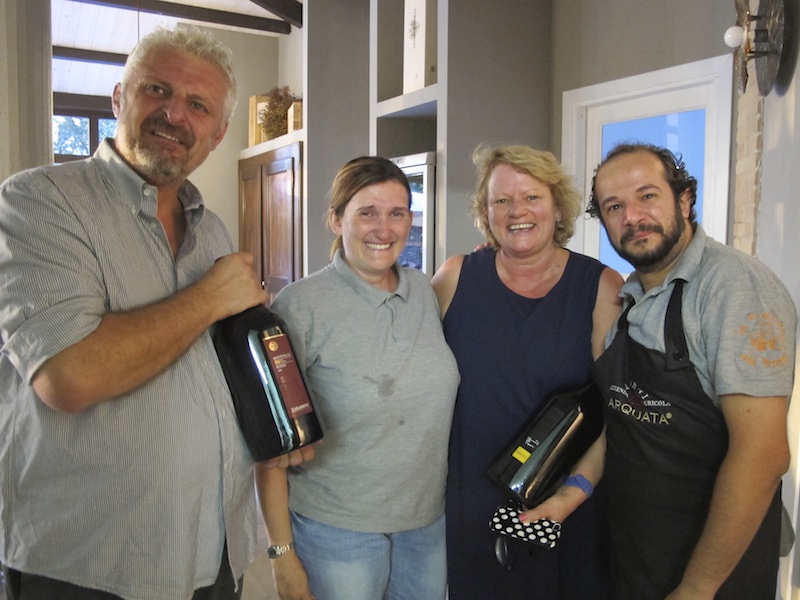 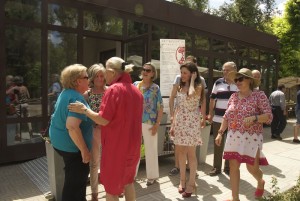 Our second visit to the new Delizie del Borgo was likewise a surprise affair. Two days after our arrival and Simone’s grand opening we had booked a table for lunch for 20 at the restaurant, but under the guise that the party would be the family staying at our nearby farmhouse la Fattoria del Gelso. In the meantime our colleague Marco had invited a bunch of our local friends to join him for lunch to celebrate Simone’s reopening. Instead, as they assembled in the parking lot outside Bevagna’s Porta Cannara we surprised them with our presence and then paraded up the pathway and into the park where our little fraternity (which had swollen to 25) congratulated and paid their respects to Simone. And then proceeded to spend the next six hours enjoying a casual lunch and many, many bottles of wine under the giant umbrellas in the warm breeze of a hot Umbrian summer day. 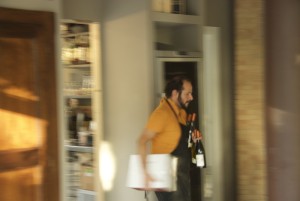 The magic of sharing Simone’s triumph and the opportunity to laugh and spend time with those we hold dearest in Italy made our impromptu surprise visit to Umbria a memory that will last a lifetime. And it reminds us why we love coming here, for here in Umbria, the “green heart of Italy” renowned for its fertile soil bursting with bounty, the thing that grows best is friendship.

We couldn't stay away for long! Read more

This was going to be the year Suzy and I did not make our annual summer visit to Italy. Instead of hot ...