One of the little-known facts about working in the cheese business  is that there is a fair amount of travel involved. Visiting cheesemakers and producers is essential to understanding your products and being able to bring them to life for your customers. Lucky for us cheesemongers, most of these cheesemakers live in some pretty darn beautiful, idyllic places. This winter, I was lucky enough to spend time in one of these gorgeous locations – Umbria.

Flying into Perugia, I was full of excitement, not knowing what to expect. I had visited Italy before – Tuscany, Florence, Venice – but had never been to the “green heart of Italy” known as Umbria. As the plane descended, I was struck by the beauty of the Apennine mountains framing the central valley. Even though it was winter, the view was indeed green – full of silvery sage olive groves and striking, pin straight cyprus trees. This was going to be a good trip. 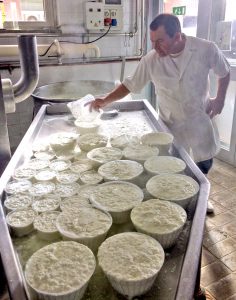 Having worked at Via Umbria since it opened in November of 2015, you could say that I have become quite familiar with Umbrian cuisine. However, experiencing this style of cooking – Torta al Testo, truffle covered everything, and lots and lots of pork – in its natural habitat was a truly one-of-a-kind experience. It was also fascinating to put these dishes into historical and geographic context. For example, Umbria is the only region in Italy to be completely landlocked, which meant that salt used to be very scarce. As a result, traditional Umbrian bread is still to this day made without salt.

Learning about the cheese culture in Umbria was equally captivating. Because of various importation laws concerning bringing cheese into the US, I was very unfamiliar with the cheese traditions of this particular region. I was lucky enough to be able to shadow Fabio Brocatelli, a local cheesemaker whose family has made cheese in Umbria for the past three generations. Following him around the dairy, I learned that because of the fairly rocky, local mountains, the soil isn’t rich enough to support the type of pastureland necessary for cows. It is, however, ideal for goats and sheep. As such, most cheese from Umbria is either a pecorino, or made from sheep’s milk, or di capra, or made from goats. 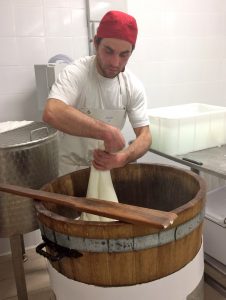 We stopped by and visited with one of the farmers who provides Fabio with sheep milk for his various pecorinos. Like most of the sheep farmers in the area, this shepherd was originally from Sardinia. As we sat at the large, farmhouse table, waiting for the espresso to brew and munching on traditional Sardinian flatbread with homemade cheese, I learned that after the devastation of World War II, many Sardinian farmers made the trek north to Umbria to continue their farming traditions. As such, the amount of sheep drastically increased, and pecorino became an ingrained part of Umbrian cuisine. As drinking espresso turned into drinking housemade wine and mirta (traditional Sardinian liquor), various neighbors started dropping by, filling the kitchen with warmth and laughter. Although my Italian is, in the best of circumstances, poor, and my Sardinian is completely non-existant, I felt charmed and welcomed by these people.

My time in Umbria flew by entirely too quickly. To say I ate well would be the understatement of the year. To say I had a good time would be equally inadequate. I am so grateful for the experience and it is one that I will certainly not soon forget.

One of the little-known facts about working in the cheese business  is that there is a fair amount of travel involved. Visiting ...