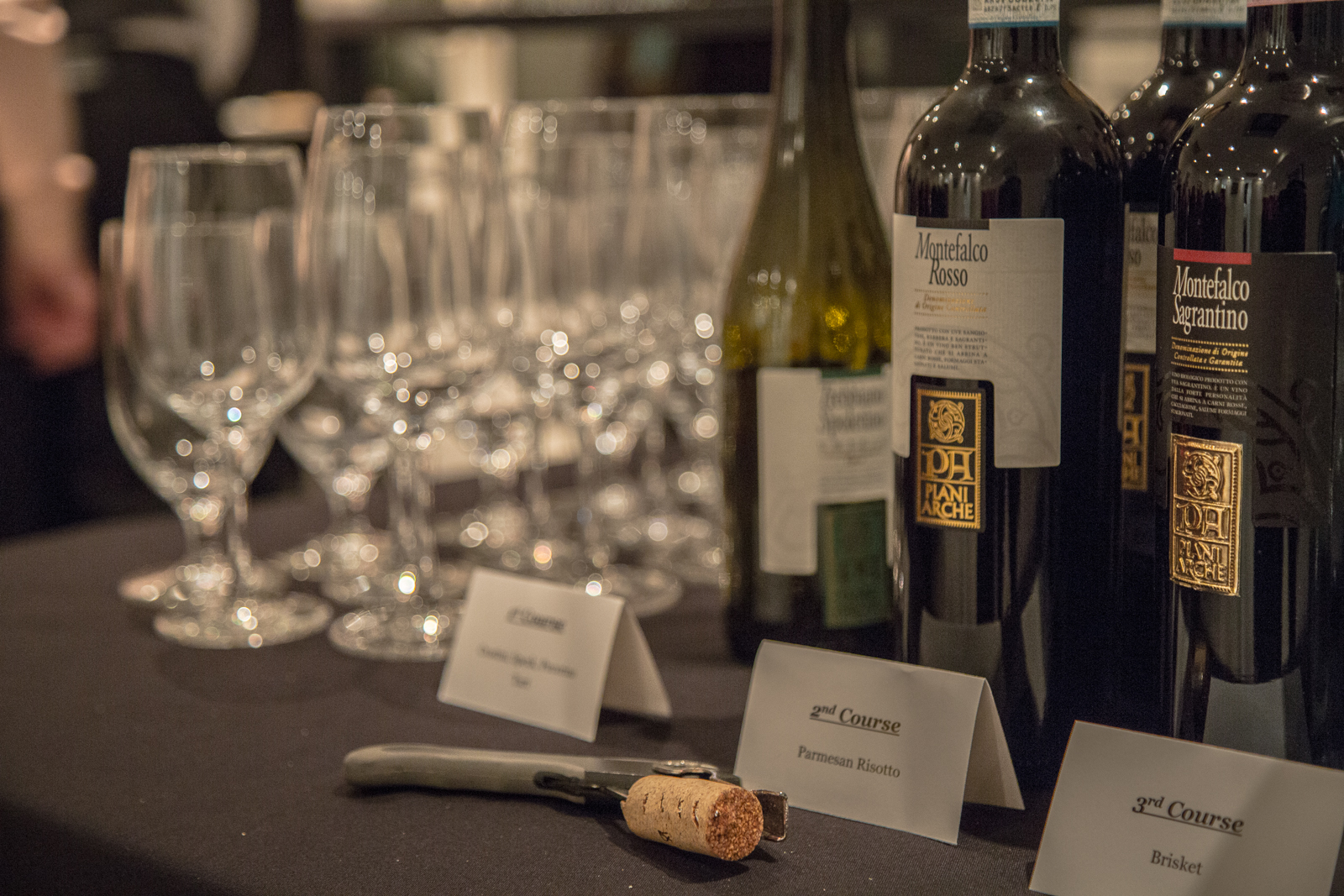 To celebrate National Drink Wine Day (yes, it’s today!) Via Umbria will embark on a new series, Wine Wednesday, in which we discus the wines we stock in the store and our adventures at the vineyards in Italy.

This chilly Wednesday we are huddled in our wine warehouse in Adams Morgan, waiting to pick up some Plani Arche Montefalco Rosso which we completely sold out of this past week. But why the sudden interest in this wine? 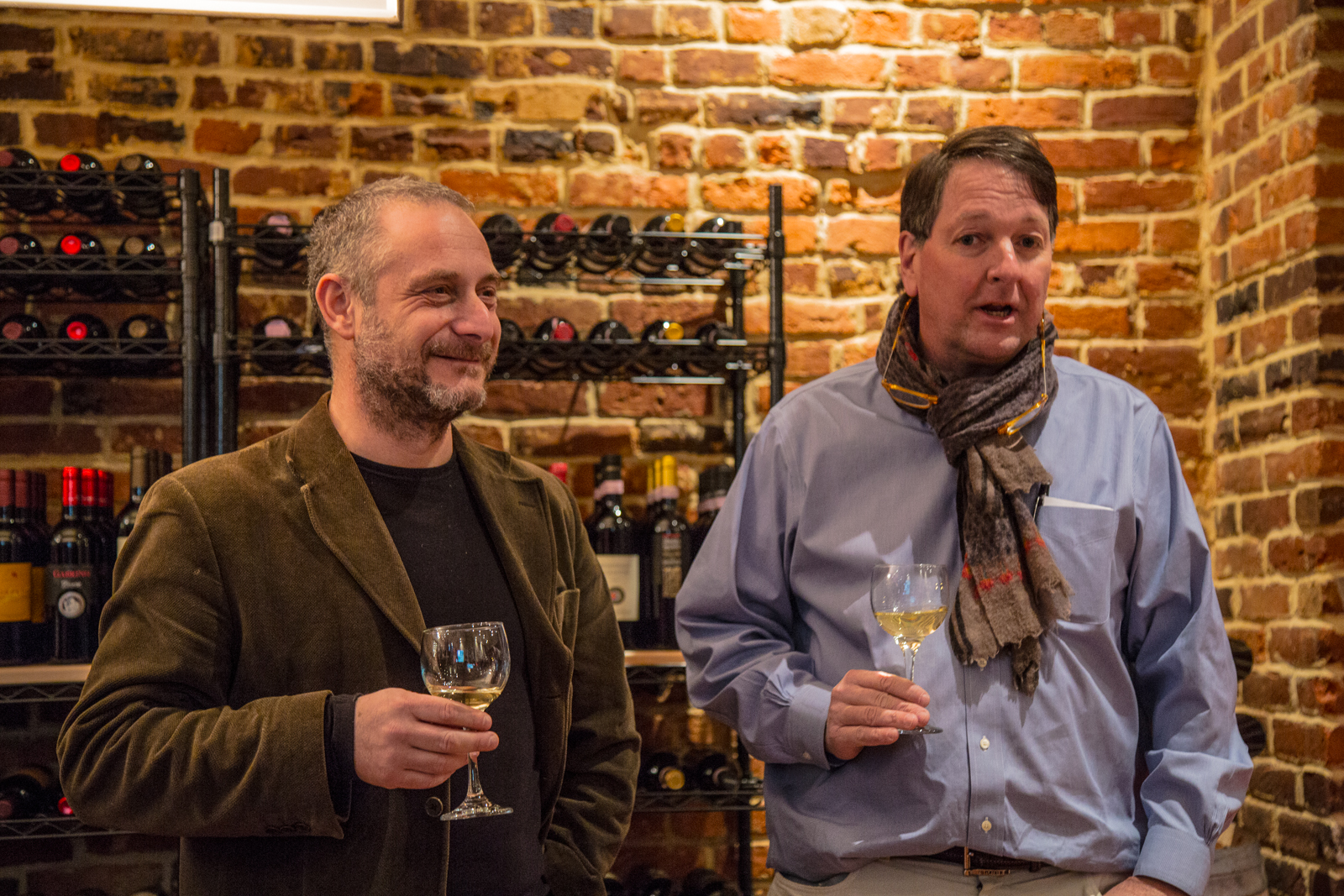 This past week we have had the treat of getting to learn from Roberto DiFilippo, the vinter of Plani Arche wines. Three wine dinners in our events space and a tasting later, we feel fully inducted into the world of the Plani Arche wines.

This wine comes from near the Piandarca, close to Assisi, and is the supposed place where St. Francis preached his sermon to the birds. Plani Arche is the Latin name with evolved over the years into Piandarca, meaning the Plain of the Rock, probably because at one time there was a rock there. The very name of this wine pays homage to the land it is grown on, and the spiritual past of the place. St. Francis, in his sermon, tells the birds to give thanks to God that he has provided them with all they need naturally, and that they live in peace with the natural world due to His grace. In this vein, Plani Arche is a biodynamic vineyard, living and breathing in harmony with the land and with the animals. Nature (or if you are religious, the big man up top) provides all one needs to make beautiful, wonderful wine, without unnatural pesticides or chemicals. Praise be to God indeed.

But living in harmony “with the animals” is not taken lightly – Roberto literally uses animals in his production. Horses substitute for tractors, which preserve fossil fuels but also compact the earth in a natural way. A herd of geese nibble the harmful insects and fertilize the land.  For a peek inside the vineyard, see Bill’s firsthand experience, which he wrote about a year ago while visiting Plani Arche. 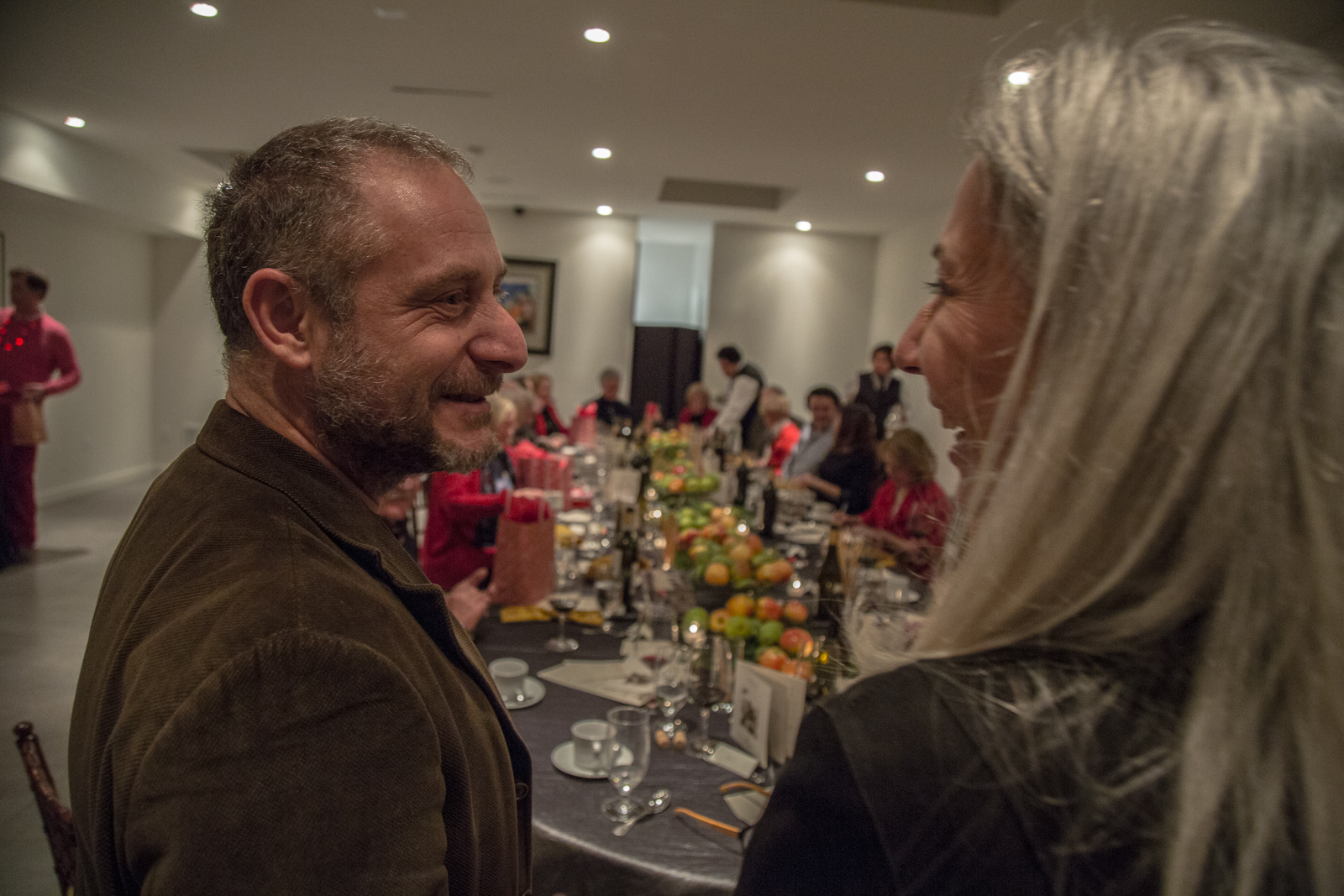 Roberto is a humble man, who creates wine in harmony with the earth because being an organic vineyard is the right thing to do, not the trendy thing to do. Working with the soil in a biodynamic way not only preserves its natural tendencies, but enriches the flavor of the wine. The proof is on our shelves — it is so good we sold out.

We have to go back for more. Waiting at the chilly warehouse is worth it.

To celebrate National Drink Wine Day (yes, it’s today!) Via Umbria will embark on a new series, Wine Wednesday, in which we ...

Back in my youth there was a period of a couple of months when I owned a Corvette.  It was pretty cool.  I felt pretty invincible and like I had arrived, driving around with the top down, not a care in the world (other than getting bombarded with gnats in the face).  One day I remember driving along the Rock Creek Parkway in DC with a friend of mine when we passed a Mustang and he exclaimed, “the enemy!”

This scene was repeated automotively a number of years later when I purchased a BMW sedan.  Driving along Connecticut Avenue to work, every Mercedes I saw made something race in my heart.  Mercedes seemed to be the natural antagonist to BMW.  (Years even later I would buy a Mercedes and suddenly they were no longer the enemy).

Every great thing has its natural, not so much opposite, as opposition.  Yin has its yang.  Hertz has its Avis.  The Red Sox have their Yankees (although until the 1990s the Yankees may not have realized it).  And so for Italy it is – perhaps and in some contexts – France.  Italians tend to live their lives in the moment without thinking too much about how others live their lives and for the most part are accepting other cultures without giving them too much thought.  True, they do bristle at others occasionally (perhaps reserving most of their ire for the German).  But in my mind the one people that they seem to silently compare themselves to the most are the French.

So please don’t tell our Italian friends, but for the past days we snuck away from Italy and have spent time in the capital of enemy territory – Paris.  Taking up refuge in an apartment in the 7th arrondissement, in the shadow of the Eiffel tower we have walked eggshells trying not to enjoy France too much, while trying to sup all the pleasures it has to offer before returning to Umbria tomorrow.  I wonder how Jimmy Carter would judge us.

So being in France has caused us a little uneasiness to balance our joy, but we are completely unapologetic in having arranged a day trip to Reims and Epernay, the epicenter of the Champagne region of France.  Put simply, we love champagne and any and all sparkling wines.  To not visit the land where brother Dom Perignon accidentally discovered the secret to making sparking wine (reputedly exclaiming upon drinking the elixir for the first time, “it’s like drinking stars!”) would be a sin of the highest order.   I certainly don’t want that blot on my permanent record. 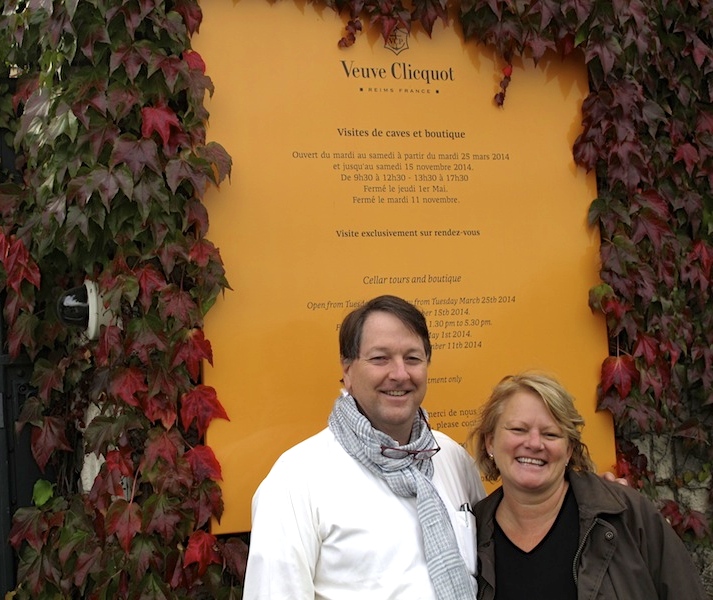 And so we spent the day in Reims and Epernay devoted to one thing only.  Learning about and drinking – mostly drinking – liquid stars straight from the black hole that produced them.

One of our favorite champagnes is Veuve Clicquot.  There are many followers out there with whom we have shared a bottle or case in the past, and so a visit to the old widow Clicquot’s estate in Reims not just made sense, it seemed like a religious pilgrimage.  It was just that. 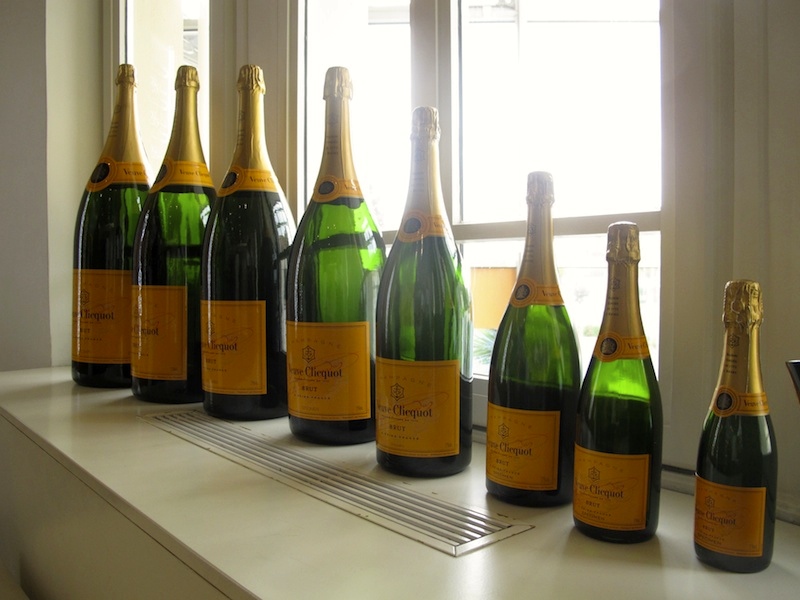 Arriving at the estate, a modern but mostly modest reception area decked out in glass and the ubiquitous orange (Clicquot calls it yellow) color, we spent an hour or so on tour, learning about the widow’s contribution to modernizing and expanding the reach of champagne (God bless her).  Then the tour of the caves, underground chalk caverns originally excavated by the Romans two thousand years ago to obtain building materials but which now form a vast network of chambers where sparkling wine is aged, bottle fermented, and refined.  Here fermented wine is fermented a second time in the bottle, producing champagne’s unique taste and signature bubbles.  Here it is riddled or rotated over time to move the spent yeast to the neck of the bottle where it is ultimately degorged, the mass of solids ejected from the bottle and replaced with a secret elixir of sugar and liqueur.  Here is where the magic happens, below ground, out of sight, as if by some magic hands or ancient spirits. 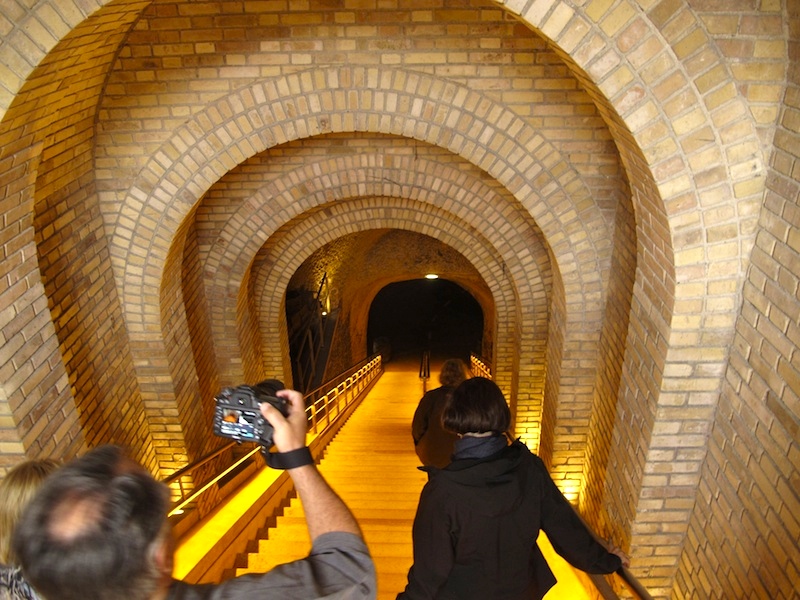 And what happens in the bottle, underground is truly the work of some benevolent spirits.  Back in the tasting room we sample the grande dame, Clicquot’s prestige vintage.  Its color and appearance reminded less of a gold liquid than soft, liquid gold itself.  And the taste was the same.  Pure gold.  Pure heaven. 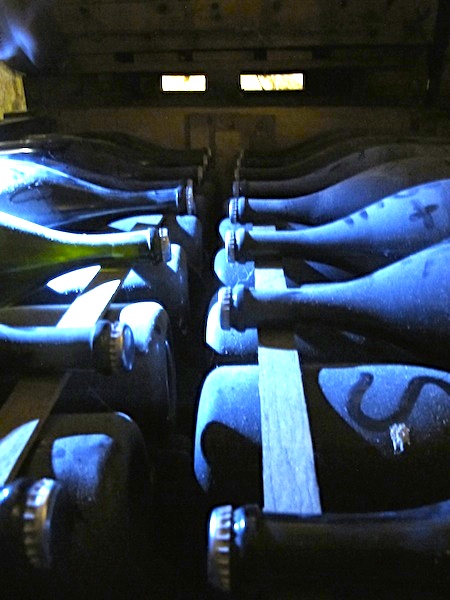 Suzy and I posed for a few obligatory photos in front of the iconic orange (yellow) signs, savoring the gift that was present in our glasses.  Whether Dom Perignon actually uttered those words he is said to have exclaimed, it truly was like drinking stars.  And whether you call them etoiles (French) or stelle (Italian), the stars undeniably look kindly upon all – French or Italian, or even American – who untwist the cage (six turns), ease out the cork, fill up a flute and pay homage to those brilliant men, women and even widows whose brilliance brought us stars in a bottle. 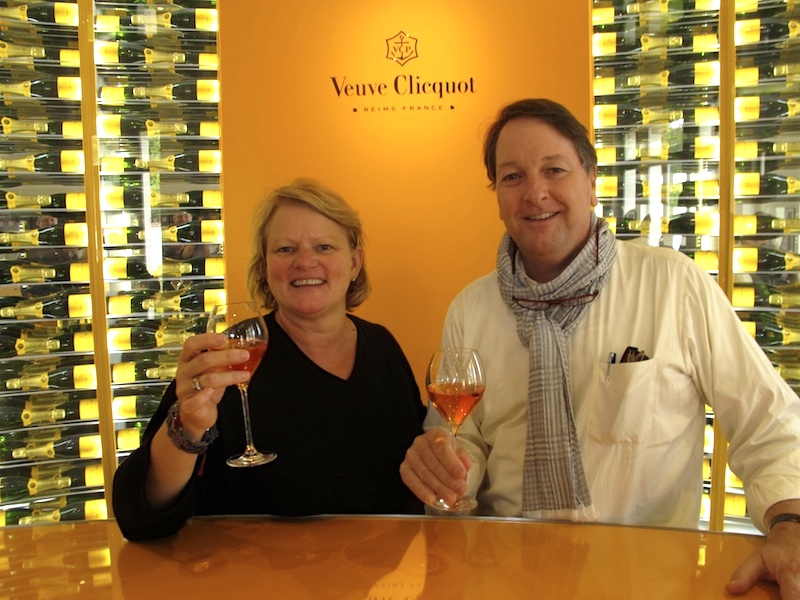 Back in my youth there was a period of a couple of months when I owned a Corvette.  It was pretty cool.  ...

It’s harvest time in Italy. If you read my previous post about our visit to the Cipolloni olive mill you’ll know that it’s not yet olive harvest time. The summer’s dry scorching weather has delayed the harvest from its traditional early October start until later in the month.

But the grape harvest, similarly affected by the summer heatwave is coming to a close. We have been able to watch and experience the harvest this year for the first time. It is a fascinating process to observe. END_OF_DOCUMENT_TOKEN_TO_BE_REPLACED

It’s harvest time in Italy. If you read my previous post about our visit to the Cipolloni olive mill you’ll know that it’s ...