Our second Umbria Food and Wine Tour began this Saturday with our group gathering together from various places throughout Italy to Santa Maria degli Angeli, the small town below Assisi where Saint Francis originally established his Franciscan order. True to its name, our first activity – at the Casa di Norcia restaurant – centered around food and wine. 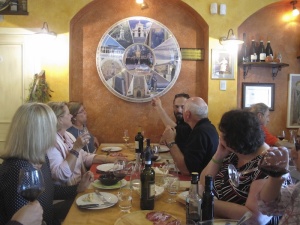 We have had very good luck with our tours in developing a strong espirit de corps among disparate groups of guests, who come together for the first time as strangers on Saturdays only to leave as close friends a week later. As our group of six – two couples and a pair of sisters – joined us at the restaurant it was apparent that this group would get along famously and by the pasta course familiarity and ease had spread over the group. It probably helped that one couple had just flown in from Washington, DC and bone tired was perhaps suffering a bit from jet lag, that there was copious amounts of wine being served and that Marco was yucking it up with everyone and making everyone feel at home. It was a good way to start our visit. 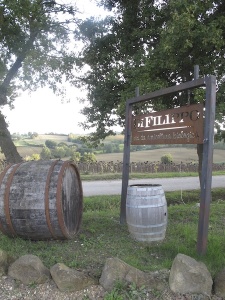 After a walking tour of Assisi, the itinerary called for a visit to the nearby DeFilippo winery before arriving at the villa for a welcome dinner. And our visit to DiFilippo, like the lunch at Casa Norcia, proved to be a perfect ‘welcome to Umbria’ moment.

DiFilippo is one of the Montefalco area’s most respected wineries and with good reason. In a zone where over 80 producers compete with one another to produce better and more memorable Grechettos, Umbria Rossos, Montefalco Rossos and Sagrantinos, Roberto and Emma DiFilippo’s wines stand out for a number of reasons. One reason is Roberto’s winemaking philosophy – he is totally committed to producing excellent wine that is organic. The other is more fundamental. His wines simply taste great. 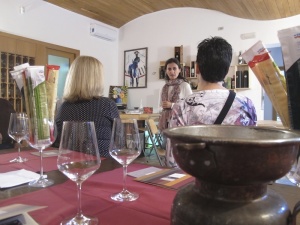 Just what constitutes organic winemaking is a concept that is somewhat difficult to nail down and to understand. In order to display an organic certification on your bottle there are a number of do’s and don’ts that must be followed but in the end the most fundamental aspect is that you cannot add chemicals to your fields or in your wines. As we fired question after question about the meaning of organic and biodynamic at our guide who was pouring us the entire range of DiFilippo’s red wine portfolio – a couple of Umbria Rossos made from 100% Sangiovese, the cantina’s Montefalco Rossos that featured a blend of Sangiovese, Sagrantino and Barbera and their Sagrantinos, both the 100% Sagrantino DOCG dry wine and the traditional sweet passito – Roberto himself 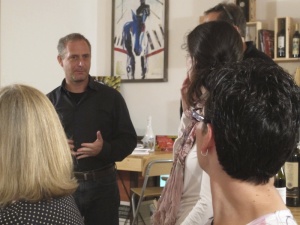 wandered into the tasting room. Recognizing him, we applauded his winemaking skill and took up the questioning with him.

And there it became apparent that organic and its stricter manifestation, biodynamic, are really quite simple. Roberto is not seeking to make organic or biodynamic wines. He seeks to make wines that taste great, that reflect the subtleties and complexities of the land on which his family has lived and over which it has toiled for generations. He seeks wines where you can taste the nature that he has been gifted and 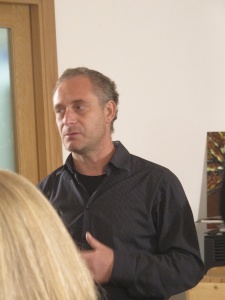 he wants to make sure that he sustains and does not disturb or destroy the gift of the land that gives him his livelihood. In short, he lives his belief that 80% of what you get in a bottle of wine comes from what is produced in the field and to get the best fruit from the field you need to allow nature to do what it does best. As nature commands, his tee shirts and aprons announce. It is a simple and simply worthy philosophy. And drinking and enjoying his wines with our new guests, it is a philosophy that seems to work.

Our second Umbria Food and Wine Tour began this Saturday with our group gathering together from various places throughout Italy to Santa ...